The large solar minimum will last until 2070 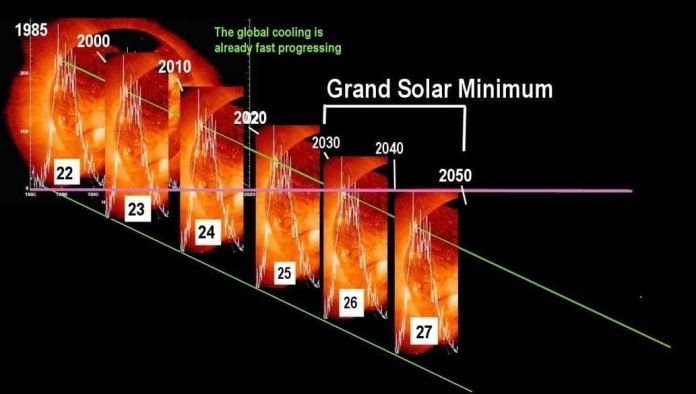 The fall in the activity of the Sun, which is called the “Great Solar Minimum”, began in 2020 and a new solar cycle has not begun. The solar minimum will last until 2070. We have entered the period of Global Cooling – the Little Ice Age.

During this period, the Sun’s magnetic field is weak and allows additional cosmic rays (high-energy neutrons and cosmic radiation) to enter the Solar System.

We have already entered the period of the Global Cooling (Small Ice Age) and this cooling can last up to 50 years.

Cosmic rays will reach and even penetrate the Earth’s surface, increasing in intensity and quantity:

In addition, the solar minimum has a direct effect on the strength of the earth’s magnetic field, and it is no longer stable. The power of the planet’s magnetic shield is already reaching critically low values. This will allow cosmic radiation (all living things in fact are in the microwave) and cosmic radiation to freely penetrate the earth.

The solar minimum does not mean the complete absence of flares. on the contrary, during the period of minimum solar activity, the occurrence of solar flares of unprecedented power is likely. Given the weakened magnetic field of the Earth, such a flash aimed at the Earth would be a disaster for humanity.

During the Little Ice Age, temperatures in the Northern Hemisphere decreased by only 0.6 ° C compared to the average temperature between 1000 and 2000 AD, but severe frosts and snowfalls led to catastrophic crop failures and hunger.

A large solar minimum occurs approximately every 200 years. The last notable event was the Dalton Minimum from 1790–1820, followed by the end of the Little Ice Age, the Second Industrial Revolution, unprecedented population growth, and the onset of the modern global warming trend (which began around 1850 and lasted until around 2000).