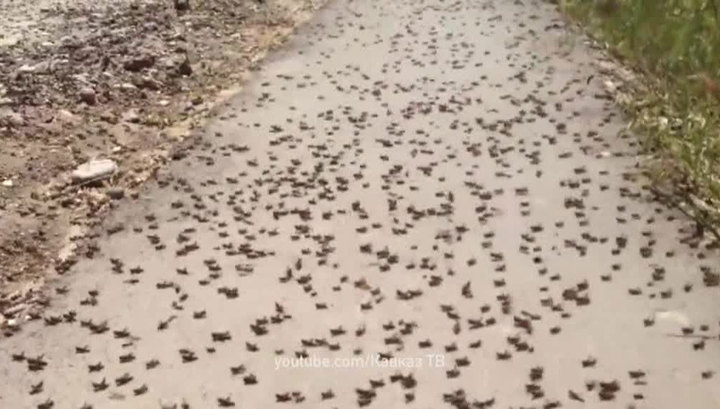 Insects attacked pastures, fields and even roads. On the Internet appeared footage, which shows how the route covers a layer of locusts. And this despite the fact that the peak activity of these insects has not even begun.

The locust army is coming in a dense formation to the North Caucasus of Russia. Because of the invasion of pests, even had to enter the emergency situation in three areas of the Stavropol Territory. In total, gluttonous insects are operating in 16 districts, occupying 350,000 hectares of agricultural land. When hordes of acryides move from one field to another, the tracks seem to be moving. At the same time it is not safe to ride on them – there is no hitch with the road surface.

200 hectares of winter wheat and 140 thousand hectares of pastures in the Stavropol region have already been destroyed. Locusts in the region declared a real war. It involves 22 airborne and 120 ground vehicles. To the 28 million rubles that the regional authorities have allocated for insecticide treatment in the spring, it has been decided to add another 30. But even such forces and means may not be enough if insects can not be overcome before they rise on the wing or, more simply, take off. It can happen in a week.

“I believe that there will be no disaster, why? Because we are actively working, we are now fighting locusts, so there should not be any panic.” I think that we are working effectively. “We must work more seriously with neighboring actors. The parties are making maximum efforts, but we would like the same reciprocity from our good neighbors, “the Minister of Agriculture of the Stavropol Territory Vladimir Sitnikov comments on the situation.

In neighboring Dagestan, the emergency situation has not yet been introduced. But there are more than 100,000 hectares of contaminated farmland.

Republican authorities believe: to defeat a pest, everyone needs to join forces. And agricultural enterprises must pre-pawn funds in their budgets to fight locusts.

“This work is ineffective when one farmer conducts phytosanitary measures, while others do not do this,” said Adilkhan Ganakaev, First Deputy Minister of Agriculture and Food of the Republic of Dagestan.

The situation with the locust invasion is under control in the county’s envoy. To combat the winged threat, a coordinating center has been established, where phytosanitary monitoring data from all regions of the North Caucasus are flocking daily. Task number one – as soon as possible to destroy the pest, in order to prevent its migration beyond the contaminated areas.