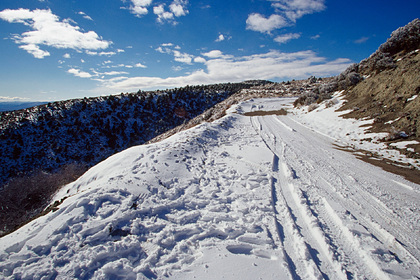 The American lived in his car for a whole week after the navigator plotted his route along a road closed due to heavy snow. It is reported by The Associated Press.

Harland Earls, 29, a resident of Downyville, California, went to visit friends in Grass Valley. On that day, January 24, the main road through the Donner Pass was closed due to heavy snow that hit California. The man told his girlfriend that he would go on a different highway, but he trusted the navigator, who rebuilt the route in a different way.

In total, up to eight feet of snow (2.44 meters) then fell, and Earls’ pickup truck got stuck on a blocked stretch of a remote road. The American tried unsuccessfully to turn the car around with a chainsaw and rope. With the onset of night, the driver had to spend the night in the car. He had with him two cans of beans, some bread and a couple of sausages. He used a propane heater stored in the trunk and melted snow into water for drinking. To keep warm, Earls taped his pant legs to his boots with duct tape.

His cell phone hadn’t been charged for several days due to moisture. According to Earls’ mother, to dry the gadget, he put the device in a bag of instant noodles and a hand warmer. One day he saw a helicopter and gave a smoke signal – on a spread tarpaulin he burned all the objects that he could find in the pickup, but the device flew by.

Family members, worried about Earls’ absence, spent some time trying to find him on their own. They reported his disappearance on 30 January. The next day, as the local authorities began to search the area from the air and by snowmobiles, Earlzs strapped a pair of snowboards to his feet, using them as snowshoes, walked about four miles (6.44 kilometers) to the nearest hill and called emergency services.

The call was interrupted, but the dispatchers were able to calculate its location using GPS. The man was urgently evacuated by the helicopter crew.

In February, a search for a missing man was reported on the coast of Barbados. A man went swimming in a storm, and was last seen on a beach near Sunset Crest on February 2.