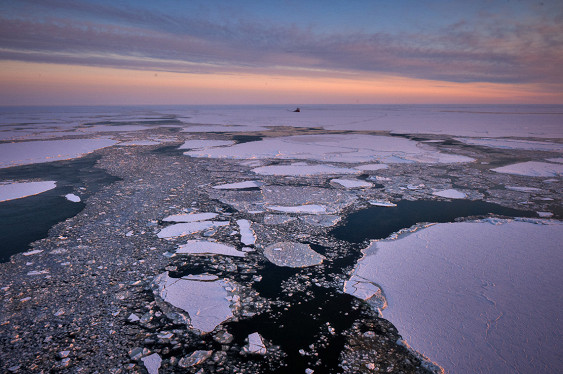 In the 1990s, at the bottom of the Barents Sea, clusters of craters were discovered, the diameter of which reached one kilometer. Subsequently, scientists suggested that they appeared in the course of explosions of gas bubbles associated with the retreat of glaciers.

A team of specialists from the Norwegian Center for Arctic Gas Hydrates, Climate and Environmental Studies (CAGE) published the results of the latest seabed survey using an accurate sonar.
Karin Andreassen and her colleagues have discovered not only hundreds of new craters, but also so-called puff mounds or “pingo”, where gas is still accumulating. Scientists also counted more than six hundred places, where methane seeps through the cracks at the bottom and gets into the water.

An analysis of the collected data showed that this methane was formed 30,000 years ago in the hot zones of a hydrocarbon-bearing rock at a depth of about one kilometer below the seabed. At that time, the Barents Sea was covered with a solid ice shield two kilometers thick. Its weight exerted colossal pressure on the bottom layers, and under these conditions the natural gas was “compressed” into hydrates – crystalline compounds with water.

In this form, methane remained stable in the upper sedimentary layer until 17 thousand years ago the ice sheet began its rapid retreat. Decrease in pressure led to the disintegration of the hydrate, and methane began to accumulate in cavities, forming on the surface of the sea day huge domes.

When 12 thousand years ago the ice cover in the middle part of the Barents Sea completely melted, these bubbles began to come in contact with warm water streams from the Atlantic Ocean, and, unable to withstand internal pressure, burst. At the same time, Adressen notes that they undoubtedly had a significant impact on the chemistry of the ocean, and it is extremely difficult to judge the possible impact on the atmosphere and climate.

“Unfortunately, we do not have enough data on the presence of gas bubbles under ice sheets in other areas, such as Antarctica and Greenland,” says Adressen in a press release. “At the same time, these regions have rich hydrocarbon reserves.”

By the way, many experts are inclined to believe that mass emissions of methane do not have a negative effect on a global scale. Previous work has shown that over the past 800,000 years, the content of this gas in the atmosphere has fluctuated from 350 to 700 parts per billion, which is well below the current level of 1900 parts per billion. This means that the gas bubbles that burst 12,000 years ago, most likely, did not have catastrophic consequences.

The same goes for gas, which oozes from the bottom cracks. It is known that after a major oil spill on the platform Deepwater Horizon, which occurred off the coast of the United States in 2010, deep-sea microorganisms actively absorbed the released methane.

Nevertheless, the authors of the new study believe that based on the size of the craters, one can not be sure that the gas did not break out onto the surface of the ocean. Scientists fear that such processes can repeat if the area of ​​polar ice continues to decline.

Detailed results of the study were published in the publication Science.
Previously, Russian scientists have also reported about the powerful methane emissions in the Arctic Ocean.