The most dangerous volcanoes of the Earth 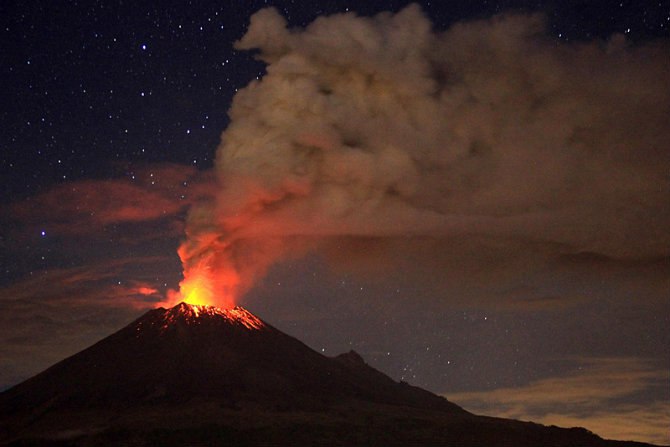 These ancient beautiful mountains with craters, when it was an important link in the formation of our planet, and throughout the Land there were a great many.

Humanity, despite all the achievements of science and continuous monitoring of the activity of the volcanoes until the end and not learned to unravel their secrets and to predict eruptions.

This volcano is the most famous and I am sure that the first turns on your language, with the word “volcano”. Is famous because in 79 it destroyed Pompeii, burying residents under the rubble of lava, pumice and ash, the volcano is silent and still, and in the 20th century, destroyed immediately two of the city’s San Sebastiano and Massa.

In General, in its history, the frequency of the eruption of Vesuvius was such that if it rebuilt the city, which, in principle, and did as the volcanic soil is extremely suitable for agriculture, the volcano destroyed them more than 80 times.

When such abnormal brain activity Vesuvius has undergone the most scrutiny of scientists and is now considered the most known and predictable on the eruption of the volcano, which is also available for Hiking and exploring, along with the national Park.

From the champion of Europe directly to the record holder of Africa – Nyiragongo volcano the most dangerous in Africa because of its extreme volcanic activity and the particular chemical composition of the lava. Activity really prohibitive – more than half of the eruptions in Africa it is the volcano.

The main danger – postivie lava lake in the crater of a volcano with a temperature of 982 Degrees. Under such conditions, the lava of the volcano is extremely hot and liquid, and with giant strength of the tremors surge reaches up to 30 m and flows downward with a speed of 100 km/h.

Regularly causing the destruction of the volcano only in 2002 claimed the lives of 147 people injured and left homeless thousands of people. Despite okrestnosti Webcams, seismographs and other instruments to monitor the volcano’s activity, the eruption of Nyiragongo to the end exactly one can not predict.

The main cause of the end of the world according to the creators of the movie “2012” is located on the territory of the Yellowstone national Park. Scientists this natural wonder is classified as a SUPERVOLCANO – that is three times larger and more powerful than normal, and he is an absolute champion in strength and power among volcanoes on the planet.

The volcano is surrounded by several hot geysers, which in 2002 became noticeably hot, and the soil began to show signs of imminent eruption. In 2006 it was also recorded lifting of the soil by 4-6 cm per year and the education incomprehensible relief cone at the bottom of Yellowstone lake.

Scientists have proved that an incredibly strong eruptions of this volcano took place earlier in history, as evidenced by the topography, the presence of hot springs and other factors. The interval between eruptions – 600 thousand years, and according to preliminary estimates, since the last eruption, it took 640 thousand years.

This volcano, with a funny for the Russian ear the name, was long considered to be asleep, but at the end of the 20th century suddenly decided to Wake up. Since then, residents of the capital of Mexico is Mexico city, located just 20 kilometers from the fire-breathing monster, always ready to evacuate.

In the 21st century the volcano shows that in no way is going to weaken their activity and “pleased” with eruptions since 2002, almost every four years with regard to emissions of sulphur and ash , they occur regularly – on a monthly basis.

All this does not stop the hot Mexican nation, which continues to grow and build near the volcano, also arranging his assault climbing teams. Obviously, thank Erenesto Che Guevara who climbed mount Popocatepetl in 1955, still does not give them rest.

The Chaiten volcano asleep about 9.5 thousand years, but just recently decided to Wake up and challenge the title of most dangerous volcano on Earth. Began to erupt in 2008, the volcano does not stop until now. On its slopes are formed of the side craters, increasing the emissions of lava.

In 2008, the Chaiten eruption was so strong that the sky over Buenos Aires was covered in a thick smog due to emission of ash. The city of Chaiten, where they had to move more than ten thousand people, decided not to renew because of the constant threat of a powerful eruption, which last time its power was such that even changed the direction of the rivers.