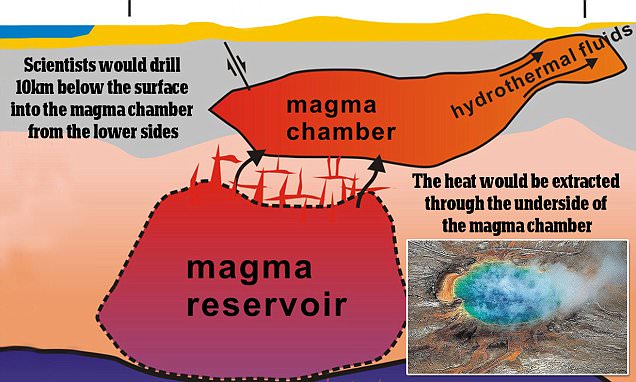 NASA has developed a very risky plan “to save humanity from the eruption of the Yellowstone super-volcano.” This plan provides for the cooling of magma by pumping water, but it can cause an eruption, and not prevent it, volcanologists sound alarm.

NASA claims that the implementation of this plan will help to eliminate the ever-threatening eruption of the super-volcano Yellowstone, which is threatening the US and the world.

The plan provides for the creation of several wells in the caldera of the volcano in the so-called lava dome and through them to start pumping high pressure water into the magma reservoir, thereby provoking the release of heat from the magmatic reservoir and relieving the accumulated pressure there.

According to representatives of the aerospace agency, Yellowstone erupts every 600,000 years and the next eruption has already approached, so urgent measures must be taken to eliminate the eruption threat.

Brian Wilcox, a former member of the NASA Advisory Council on Planetary Defense, shared a disaster risk report that has not yet been published outside the NASA agency.

“I was a member of the NASA Planetary Defense Advisory Council, which studied NASA’s methods to protect the planet from asteroids and comets,” says Brian Wilcox, who now works at the NASA Jet Propulsion Laboratory at the California Institute of Technology.

The report said that the eruption of the Yellowstone lead to global devastation of the world, the consequences would be disastrous, both for the United States in the first place, and for the world in the aftermath. Therefore, the report proposes a method for taming a super-volcano.