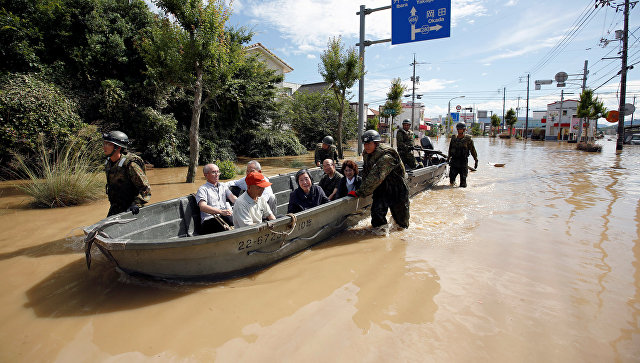 The number of deaths as a result of torrential rains and landslides and floods caused by them in Japan increased to 62 people, 45 people are reported missing, local media reported.

According to Kyodo, the highest number of deaths was recorded in Hiroshima Prefecture in the south-west of Honshu Island and in Ehime Prefecture on Shikoku Island. According to the NHK television channel, six people are unconscious, another 45 people are reported missing. The Associated Press reported 76 deaths.

On Friday, heavy rains hit the central and south-western parts of Japan. By Sunday morning in Gifu Prefecture, more than 1050 millimeters of precipitation fell, in the prefecture of Ehime – 745 millimeters, Kyoto – 465 millimeters, Hiroshima-442 millimeters, Hyogo-430 millimeters, in Okayama prefecture, where in some areas the houses were flooded to the second floor and higher , dropped out 310 millimeters. This is 2-3 times the average monthly rate.

According to forecasts of meteorologists, showers with an intensity of up to 200 millimeters per hour will continue in the south-western and central regions of Japan and on Sunday. Reports of destruction and flooding continue to flow. In the prefecture of Hiroshima, the flow of the flooded river was swept away by a railway bridge. In Okayama prefecture, where the water level rose to the second floor and higher, people on the roofs ask for help.

In the morning, at the office of Japanese Prime Minister Shinzo Abe, an emergency government headquarters began to work on collecting and analyzing information on the consequences of torrential rains and coordinating the work of agencies involved in eliminating the consequences of the disaster. During the meeting, Abe stressed that “the safety of many citizens has not yet been confirmed,” and called for every effort to carry out rescue activities and evacuate the victims.