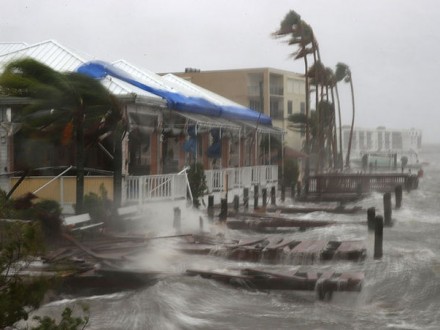 The number of the victims of the hurricane “Mathew” in the USA increased up to 30 people, reports NBC TV channel. Fatal cases are fixed in five states – Virginia, Florida, Georgia, and also South and Northern Carolina.

According to TV channel, the greatest number of the victims – in Florida. There 12 people, three – as a result of direct stroke of a storm and nine – died from poisoning with carbon monoxide, failures with power supply and other complications caused by elements. In Northern Carolina 11 people, in South Carolina and Georgia – on three persons, in Virginia – one died.

Northern Carolina Pat Makkroy’s governor specified that most of the victims rolled in the cars, trying to get out of a disaster zone where many rivers flooded banks. With respect thereto he urged inhabitants to refuse trips on cars on the waterlogged territories to avoid the new victims.

Meanwhile water level continues to grow in the rivers. Because of breaks of power lines in Georgia, Florida and South Carolina without electricity there were left more than 1,5 million people, NBC reports. In Georgia, as of October 10, without light and heat there are left about 124 thousand people, the Georgia Power company reported. In Northern Carolina – more than 400 thousand people, report NBC with reference to local department of public safety.

The governor of South Carolina Nikki Haley asked the U.S. President Barack Obama to announce the territories of 13 districts of this state a natural disaster area. On Monday, October 10, Obama signed the decree on the announcement of emergency mode in 31 districts of Northern Carolina.

On October 9 it was reported about death in the USA from the hurricane “Mathew” of 16 people. It became known is later that the storm lost the status of a hurricane over the territory of the USA.

Mathew became the most powerful hurricane in the Atlantic Ocean since 2007. In addition to the USA, he mentioned Dominican Republic, Jamaica, Cuba and the Bahamas. The greatest number of the victims – more than 900 – is fixed to Haiti. There three-day national mourning is declared. Presidential elections and parliament which shall take place on October 9 are postponed (new date will be designated on October 13).

On October 10 the UN Secretary General Ban Ki-moon called the event a terrible tragedy and called for the international support of injured residents of the Caribbean Region. He told that to Haiti the whole cities and villages are destroyed. Inhabitants are threatened by epidemic of cholera and other diseases which are transmitted through water. More than one million people need the help. Buildings of hundreds of schools are damaged.