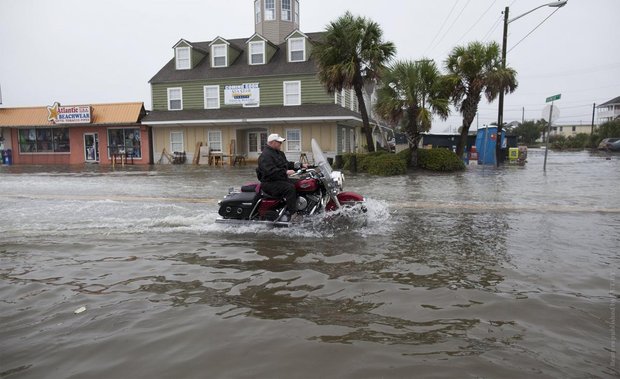 Currently it has increased to 42 people. The new deaths occurred in North Carolina. On the eve of local authorities confirmed the death of 22 people. One person drowned in the car. The Governor of North Carolina Pat Mccroy once again urged residents to abandon the use of vehicles and stay away from flooded roads.

Besides the roads under water were some settlements, particularly the town of Princeville, North Carolina. The city’s population is about two thousand people.

Due to the floods in many cities electricity. In the USA without light and heat remain more 43,7 thousand people. In a number of affected States is continuing the evacuation of the population.

In addition to U.S. hurricane has affected the Dominican Republic, Jamaica, Cuba and the Bahamas. Also severely affected the Republic of Haiti, there is recorded the greatest number of victims. Earlier it was reported more than 900 victims. However, authorities have so far confirmed only 473 deaths in the aftermath of the hurricane. It is expected that in the future this figure will increase. In addition, more than 1.4 million people in the country need humanitarian assistance.

Hurricane Matthew has formed in the Atlantic on September 28. He became the most powerful hurricane in the region since 2007. In early October, the hurricane reached its peak strength. Then the wind speed inside it was up to 257 kilometers per hour, he was rated the fifth category.

4 October Matthew weakened to a category four, struck Haiti and Cuba, and then to the Bahamas. When Matthew reached the coast of the United States, his power decreased to the minimum for a hurricane the first category.

6 October in the Atlantic ocean has formed a new hurricane Nicole. On Thursday, he made up the third category and hit on Bermuda, flooding some homes and leaving the world of 27 million people. However, the significant damage the storm caused. By Thursday evening he moved away from the coast. According to the national center for U.S. monitoring hurricanes, now Nicole is in the Northern part of the ocean and has the power of the first category.