The Pacific Ocean has warmed to a dangerous level

“Pacific Ocean Thermal Wave-2019” – as the scientists called the discovered anomaly. It is observed on a site stretching from Northern Alaska to Southern California. The water temperature there quickly rose to a very dangerous level.

In some places, the water temperature is already “as much as 6 degrees above normal”, and experts are increasingly worried about what will happen if the water continues to heat up.

According to ZeroHedge with reference to a statement made on NPR, the situation is already so critical that the anomaly can lead to the death of marine fauna and the “destruction of commercial fishing” along the west coast. This refers, in particular, to the possible death of the salmon population harvested in these parts. 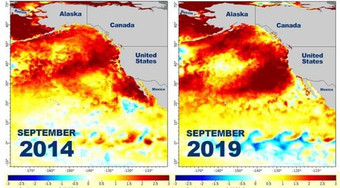 A similar anomaly, called the “blob killer” (Blob), was observed by scientists in 2014. Then a local temperature increase of 7 degrees on average led to the death of hundreds of millions of marine animals. At the same time, scientists note that if the situation is similar, then this phenomenon will stop. However, it is already clear that the effect will be as strong as 5 years ago.