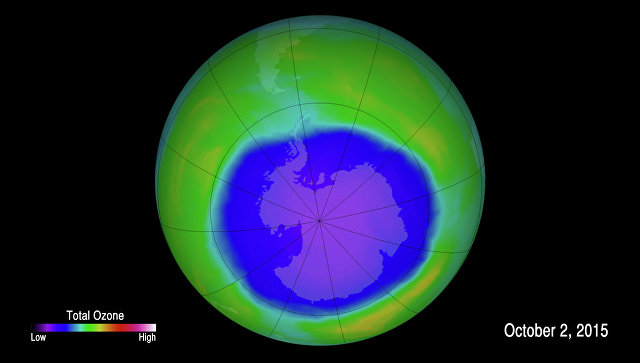 Recent observations on the state of the ozone layer have shown that the rate of its recovery over the Antarctic has significantly decreased due to the growing emissions of dichloromethane solvent, which is now widely used for the production of beer, coffee and paint solvents, according to an article published in the journal Nature Communications.

“The Montreal Protocol, which limits the use of freons for 30 years, has successfully coped with its task and limited the damage people cause to the ozone layer, this discovery shows that this success can be completely nullified if other sources of gases that destroy ozone are not open And they are liquidated right now, apparently, India and Indochina are their sources today, which should be specially studied in the future, “commented Grant Allen, a physicist from Manchester iversiteta (UK).

In 1985, Susan Solomon, a US chemist, and her colleagues discovered that freons and other halogen compounds destroy the ozone layer, which in some regions of the Antarctic has already led to the appearance of “ozone holes” – zones through which ultraviolet radiation from the sun Unimpeded reaches the surface of the Earth.

The rapid adoption and implementation of such plans, as scientists learned two years ago, suspended the growth of the ozone hole, keeping it within Antarctica and the Arctic, but has not yet led to its reduction. The first “visible” results from the ban on the production of freon scientists expected to see in the second half of 2020, but this process, as recently discovered by Solomon and her colleagues, has already begun in recent years.

John Pyle of Cambridge University (UK) and his colleagues conducted a new series of observations on the state of the ozone layer in Antarctica, which demonstrated that this process has slowed significantly in the past few years and revealed the reason for this.

Studying satellite imagery and data from weather stations in the Antarctic, scientists drew attention to the fact that the air of Antarctica contains an unusually large amount of matter that they did not expect to see there – dichloromethane, one of the most popular reagents in the food and chemical industries. In addition, dichloromethane is used in the production of hydrofluorocarbons, an analog of freons, safe for the atmosphere and ecology.

As Pile and his colleagues say, scientists have known for a long time that this substance interacts with ozone and destroys its molecules. They did not pay close attention to it because the molecules of this solvent very quickly disintegrate in the atmosphere under the action of sunlight and other substances and live in it for no more than six months.

It turned out that in recent years the concentration of dichloromethane in the atmosphere has doubled, and now it has started to strongly influence the behavior of the ozone layer, slowing its recovery. The strength of the action of dichloromethane in the Antarctic is in fact relatively low, since its main sources are in the northern hemisphere. There, as ecologists suggest, it has a much stronger effect on the state of the ozone layer.

As calculations of scientists show, the further growth of its share in the air can delay the restoration of the ozone layer for 30 years into the future at best, and in general completely stop it in the most negative combination of circumstances. Moreover, even if dichloromethane were to be completely discontinued today, its presence in the atmosphere has already slowed down the dragging of the ozone hole over the Antarctic for five years.

For this reason, scientists urge governments around the world to conclude a new agreement, similar to the Montreal Protocol, under which all substances, including dichloromethane, that are present in the atmosphere and participate in ozone solution will be banned.