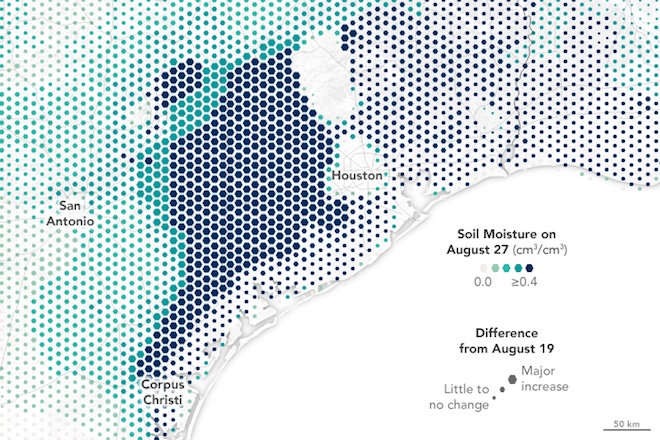 Hurricane Harvey shed a record amount of rain in Texas, especially in the Houston area, since it landed on August 25, 2017. The image shows the effects of the storm from the perspective of saturation with soil moisture.

The map above shows the state of the soil in South Texas on August 27 compared with the figures from August 19. Colors on the map reflect the moisture of the soil, the darkest colors – impregnated with water, moist soil. The size of each hexagon shows how the moisture level of the soil has changed since the time when Harvey has not arrived yet, and until the middle of its rampant.

The data is scant in Houston itself, since most of this area is covered with impenetrable surfaces (roads, buildings and infrastructure).

Climatological reports before the collapse of the hurricane show from anomalously dry to moderately arid conditions to the north and west of Houston and next to Corpus Christi. Meanwhile, the areas to the east and northeast of Houston were quite wet, not having the special ability to soak up more rain.

Meteorologists from the South-Eastern Regional Climate Center noted on August 23 that Texas, Louisiana and other southern states recorded the wettest months in history – before Harvey arrived.

According to SMAP observations, the soil moisture level reached 20-40% in some areas of Texas even before the hurricane; after the collapse, the level reached 30-60%. Wet conditions prevented Harvey’s rainfall from penetrating deep into the soil, thus increasing the likelihood of flooding.

In those areas that were abnormally dry before the storm, the dried soil was more conducive to water absorption.

Imagine that Texas soil is a sponge. A dried sponge takes a little time to loosen and soak up water, whereas a wet sponge can not absorb much more water.

“Since part of Texas is now flooded, it will take some time for the soil to dry,” says Simon Yue, a SMAP scientist. – If the soil remains saturated, the chances of flooding will be higher if another storm comes. Fortunately, no new storms are expected in the next few weeks. “