The satellites filmed the flood caused by the hurricane “Maria” 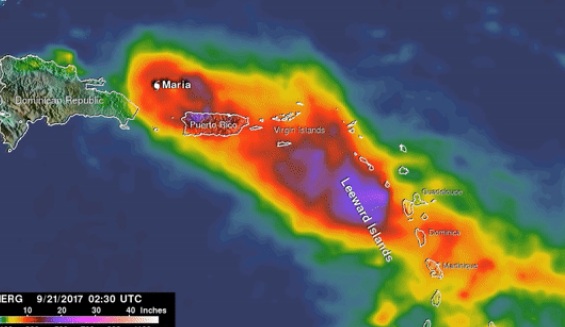 NASA’s climatic satellites received detailed data and filmed the process of flooding the islands of the Caribbean Sea with rains caused by hurricane Maria, the space agency’s press service said.

Hurricane “Maria” appeared on September 16 this year, when another tropical cyclone appeared over the Atlantic, which began to absorb the thermal energy of the sea. The next day, a powerful storm arose, which quickly expanded to the hurricane of the fifth danger category and became a record power in its power, bypassing the “Irma”.

Three days later, on September 20, it hit the shores of the island of Puerto Rico, causing massive floods and creating a serious threat to the radio-astronomical observatory “Arecibo”, the world’s second largest radio set after the FAST telescope in China. According to the current estimates of the authorities of the island, the hurricane has already managed to kill at least 12 people, and 15 more people died on the island of Dominica.

NASA satellites followed the movements of this storm, watching the changes in precipitation levels and the catastrophic consequences that it caused. As shown by measurements from the GPM probe, “Mary” caused a real flood in the Leeward Islands of the Caribbean Sea, as well as in Puerto Rico and the Virgin Islands, which fell about 500-900 millimeters of precipitation.

Such a level of precipitation, as noted by scientists, is about half of the annual rate for these islands, and now the authorities of the region have to deal with the consequences of such a “great flood”.

Passing over the island, as the images from the satellite Suomi NPP show, “Mary” turned to the east and “blinked” with her eye – in its center temporarily appeared a region free from clouds, and then it disappeared and reappeared. Now, “Maria” is two hundred kilometers from the island of Dominica and moves to the north, and scientists expect that in the coming days its strength can grow.