The sea horse attracted attention to the pollution of the ocean 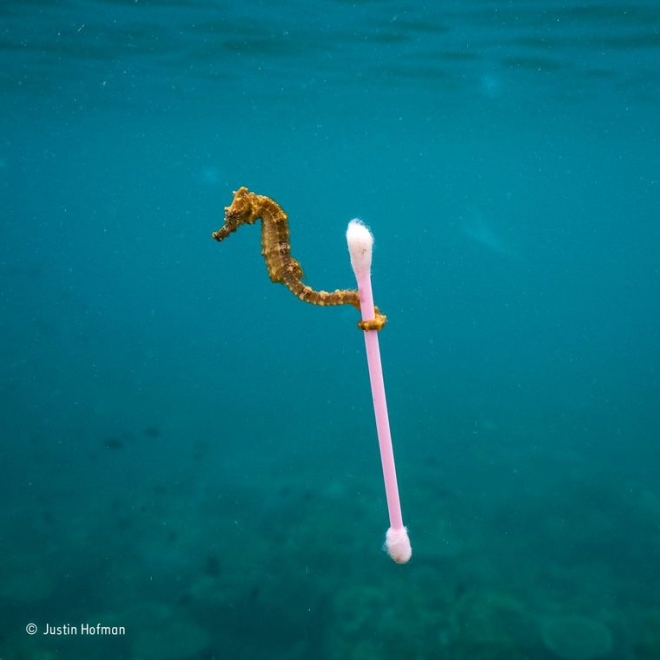 In the oceans will be more plastic than fish by 2050, according to the World Economic Forum. But do not wait for the future to witness dark scenes of water pollution. Just look at this photo. Photographer Justin Hoffman took a picture of a tiny seahorse off the coast of the Indonesian island of Sumbawa in Indonesia, one of the most biodiverse countries in the world.

“The tide came and the garbage got into the ocean,” says Hoffman, 33. – Seahorse first seized algae, then a piece of plastic, and then – a cotton swab. It was a strange transition from nature to artificial materials in a short time. ”

Hoffman wanted to admire the local coral, but, to his surprise, the water was very dirty. White vague spots on the background – pieces of plastic floating around. And then the water began to smell badly, as impurities entered into it.

Sea horses often cling to various natural objects in the ocean, for example, to plants or corals. But since people throw plastic into the water, skates, “hugging” plastic garbage, can become a new norm.

Earlier this year, the Indonesian government allocated up to $ 1 billion to cleanse the oceans. But the problem is urgent not only in Indonesia. Hoffmann travels the world, showing people rare, vanishing creatures with the hope that this will help preserve the wildlife.

“I was in the Arctic a couple of weeks ago, and we watched as a polar bear dug in the garbage and ate plastic. It tore our heart, “he says.

“I saw fishing with dynamite, catching sharks, starving polar bears, whales caught in the net … a lot of things that are being depressed. Sometimes I feel like I’m carrying this load on me, “he added.

Hofman’s photograph became a finalist in the contest “Wildlife Photographer of the Year” at the Museum of Natural History in London. The photo has gained incredible popularity, since it indicates a balance between innocent, delightful and tragic.