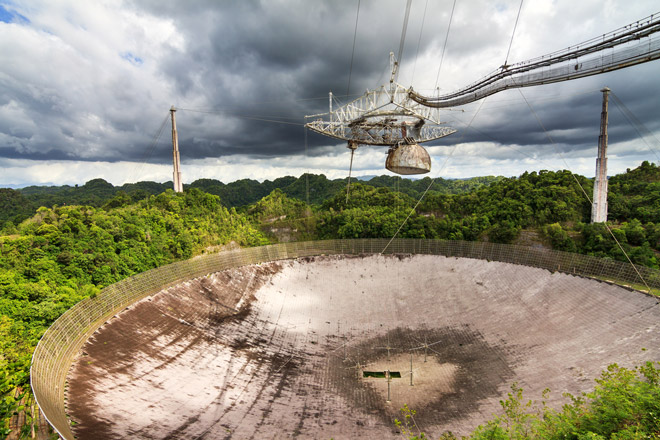 From the hurricane “Mary” suffered the second largest terrestrial telescope in the world. The winds of the weather system did not spare the 29-meter antenna suspended at an altitude of 150 meters above the reflector of the Arecibo telescope in Puerto Rico. The fragments of the broken device for receiving radio waves fell on the reflector bowl and damaged it. Also, the hurricane caused damage to the auxiliary reflector.

The amount of repair work and the time it will take to restore the telescope’s working capacity is not yet called. Space observations in Arecibo are temporarily suspended.

Observatory in Puerto Rican Arecibo began to build in 1960. The bowl of the radio telescope is in a natural karstic funnel, the diameter of the main reflector is 304 meters, the auxiliary reflector is 12 meters. From here, observations were made of Mercury, as well as of objects in deep space – pulsars.

The furious winds of “Mary” hit the Caribbean, which barely managed to escape from the attack of the hurricane Irma. During the passage of “Mary” Puerto Rico was almost completely left without light and mobile communications.