The shower caused a flood in the Moscow 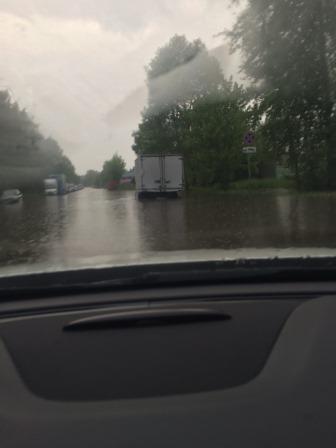 Yesterday at four o’clock in the Mytishchi municipal district of Moscow region on the control duty of the local Department of traffic police received a report that the street of the Initiative at the house 7 in the cabin of the car “Mercedes” locked girl. In a few minutes the place was the crew dorozhno-patrol service composed of police Lieutenant Maxim Vlasenko and senior Lieutenant of police Igor Evsyukova.

“Arriving on the scene, we saw podtopleny a part of the carriageway, in the middle of which was a vehicle. Long without deliberating, my partner went to the car. Approaching the transport, he saw in the cabin a girl who was in a state of shock,” – said the inspector of traffic police Igor Evsyukov.

It later transpired that the engine car had water hammer and failed. The cabin filled with water, the driver was locked in the car and couldn’t get out.

The police convinced her that she was safe. After that, she was able to shift the transmission into neutral, and car inspectors manually towed the car on a dry surface. Opening the doors of the vehicle, the driver is in shock and handed to the ambulance crew.

“I did not even realize what happened. The engine stalled, my car began to fill with water, door is locked. I was terrified, didn’t understand what was happening. I was very lucky that there were employees of traffic police. Being waist-deep in water, they told me what to do and after ten minutes my vehicle and I were safe. Human them thank you,” said caught in a nonstandard situation on the road near Moscow Irina Korotkova.