The shower made a flood in Goryachiy Klyuch 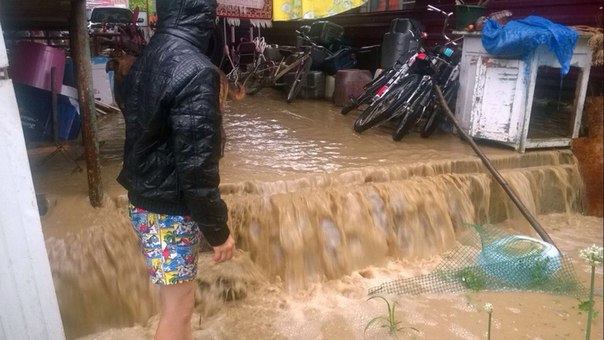 4 hours in the Hot Key dropped 32 inches of rain for the first time in the last 10 years flooded the Central streets of the city. The main impact of elements occurred in the neighborhood, “Fork”, where flooded 20 yards. The water level in the river Psekups climbed for two hours up to 40 cm

Streams of water flooded storm drains, 36 adjoining areas and got in 6 houses. In some places the water level reached one meter.

– The situation difficult, but we solved this problem, – noted the head of the city Ivan Fedorov. – All utilities and emergency services of the city work in the strengthened mode.

All the machinery used – excavators, cranes, machinery, bilge water. Specialists of housing and communal complex, is monitoring the situation and is podvorovoy crawl through the city streets affected by heavy rainfall.

Currently, the water leaves the grounds of the houses. In the near future the administration will be an emergency meeting, which will summarize the results of the damage in flooded areas in the rain, said “the BOOK” in a press-service of the resort city.

In works on liquidation of consequences of heavy rain was attended by about 70 staff in all departmental units.