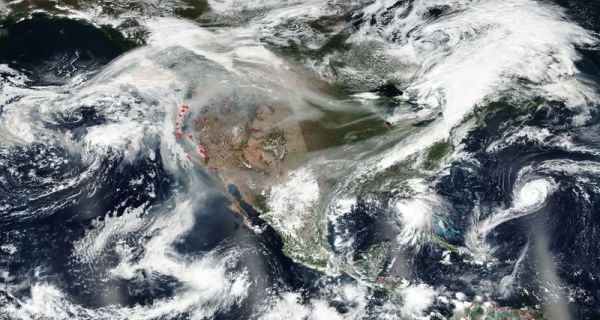 The smoke from wildfires on the west coast of the United States spreads throughout the country, moving north to Canada and across the Atlantic Ocean to Europe.

NASA has released images from space showing that the winds carry the smoke of California fires across the country. This leads to a deterioration in air quality.

“Aerosols are a mixture of fine particles and chemicals that result from the incomplete combustion of carbonaceous materials such as trees, grasses, peat and bushes. Smoke contains carbon monoxide, carbon dioxide and particulate matter … The smaller the particles, the easier they are absorbed into the lungs, ”- said in NASA. Smoke and aerosols lead to burning eyes and runny nose, as well as exacerbate heart disease, lung disease, and so on.

NASA’s infrared probe, which is aboard the Aqua satellite, monitors carbon monoxide emissions. The agency notes that the pollutant can remain in the atmosphere for a month after the release and travel long distances.

But it’s not just US residents who suffer from fires. The Canadian Broadcasting Corporation said the smoke has reached at least five provinces in the country. The European Space Agency (ESA) is also monitoring the spread of smoke over the Atlantic Ocean and Europe.

“Fires in the United States this year are tens or hundreds of times more intense than the 2003-2019 average. At the same time, a lot of smoke is released – fires in California and Oregon have already emitted record amounts of carbon into the atmosphere. The smoke from the fires is visible even at a distance of more than 8000 kilometers from the places of fire, ”said ESA Senior Researcher Mark Parrington.