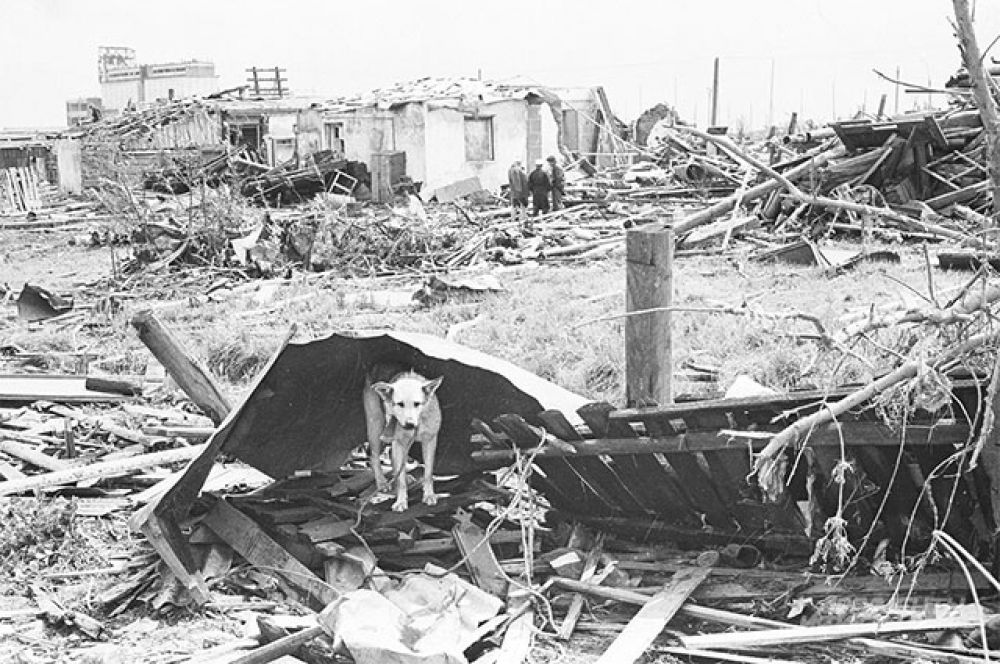 June 10, 1984 in the city of Ivanovo counted losses after the terrible natural disaster that struck the city the day before. Hurricane, which was held in Ivanovo in June 1984, was named “Soviet Tornado”. He took 100 human lives in two minutes, 804 people were injured, many were missing. So far, 33 years later, no other details of the natural disaster and accurate data on the dead, no one has brought.

I heard the story of this day in a retelling of a local resident. It was a good Saturday day, weddings were raging in the “city of brides”, many Ivanov people went to the countryside, dacha dug in the beds.

Having received “independence” from their wives, three peasants “figured out for three”, bought a bottle of “Moskovskaya”, fused cheese “Druzhba” and went to the bank of the river where a treasure glass was waiting for them on a birch bough. Suddenly the weather began to deteriorate, a strong wind blew, a black cloud suddenly “extinguished” the sun. There was a loud rumbling in the air. The peasants hurried, two drank their norm, and the third, with an Adam’s apple, remained with his head thrown back. Staring his eyes in the sky, he poured vodka into his collar: “Look, the cows fly! Dopilis! It’s time to tie! ». And then, on their backs, hail struck, at first the size of a pea, then with a chicken egg. Wives of their house did not recognize, completely sober, from feet to toe smeared with mud, with sand in their ears.

It became known that almost near the place was grazing herd, and many owners did not find their cows. And only after a few days the dead animals were found for hundreds of meters on the other side of the river, and not only cows, but also cars and traffic lights flew in the city and its environs. A huge black funnel, with numerous sleeves sucked water from ponds, garages. The tornado was so strong that it tore a fifty-ton tank from the water tower, and threw it 200 meters away. At the freight station “Textile” crane (carrying capacity of 42 tons and weighing 350 tons), a tornado was tied into a knot, raised a few meters from the ground, and seventy ton containers were found within a radius of more than a kilometer.

Specialists then calculated that the maximum wind speed in the area of ​​Ivanova was about 100 meters per second. In two minutes, the tornado zigzagged over a hundred kilometers in the neighborhood. Having traveled through many areas, I saw the ruined houses, huge trees turned upside-down, broken-down country villages, destroyed cemeteries, with turned-out gravestones, piles of twisted metal and even entire roofs of houses lying on the road. Many cars were turned into metal lumps. On the ground lay poles and poles of power lines. In the forest the trees were felled or broken at a height of up to three meters. Two days later a horse was found on one of the trees, which was removed only with the help of a crane.

Eyewitnesses told a lot of strange stories: one of the truckers, waking from the impact, found that instead of linoleum lies on bare boards. At the other dacha woman the tornado blew the roof, destroyed the house, but there was a chiffonier, for some reason clogged with slate. Another gardener was thrown out of the house for about 15 meters, alongside the broken Zhiguli in the ditch, and two peonies grew on the flower bed: red and white. From red there is no trace, and on a white tornado has not touched a single petal. The table with the instruments disappeared without a trace, and the box with the nails remained. Another mistress, hearing the rumble, climbed into the cellar. When she got out into the white light, she saw that there was no roof and no furniture on the house, two walls fell. But in the corner there was a refrigerator, which she did not have. But her neighbor left his passport from his pocket, which was then sent to him from Kostroma. All wounded men noted one strange circumstance that the pain from wounds received during the tornado was not strong, and the wounds healed quickly and without complications, while the small items-branches, straws, caused severe damage, penetrating into the human body to a depth of up to 5 Centimeters. 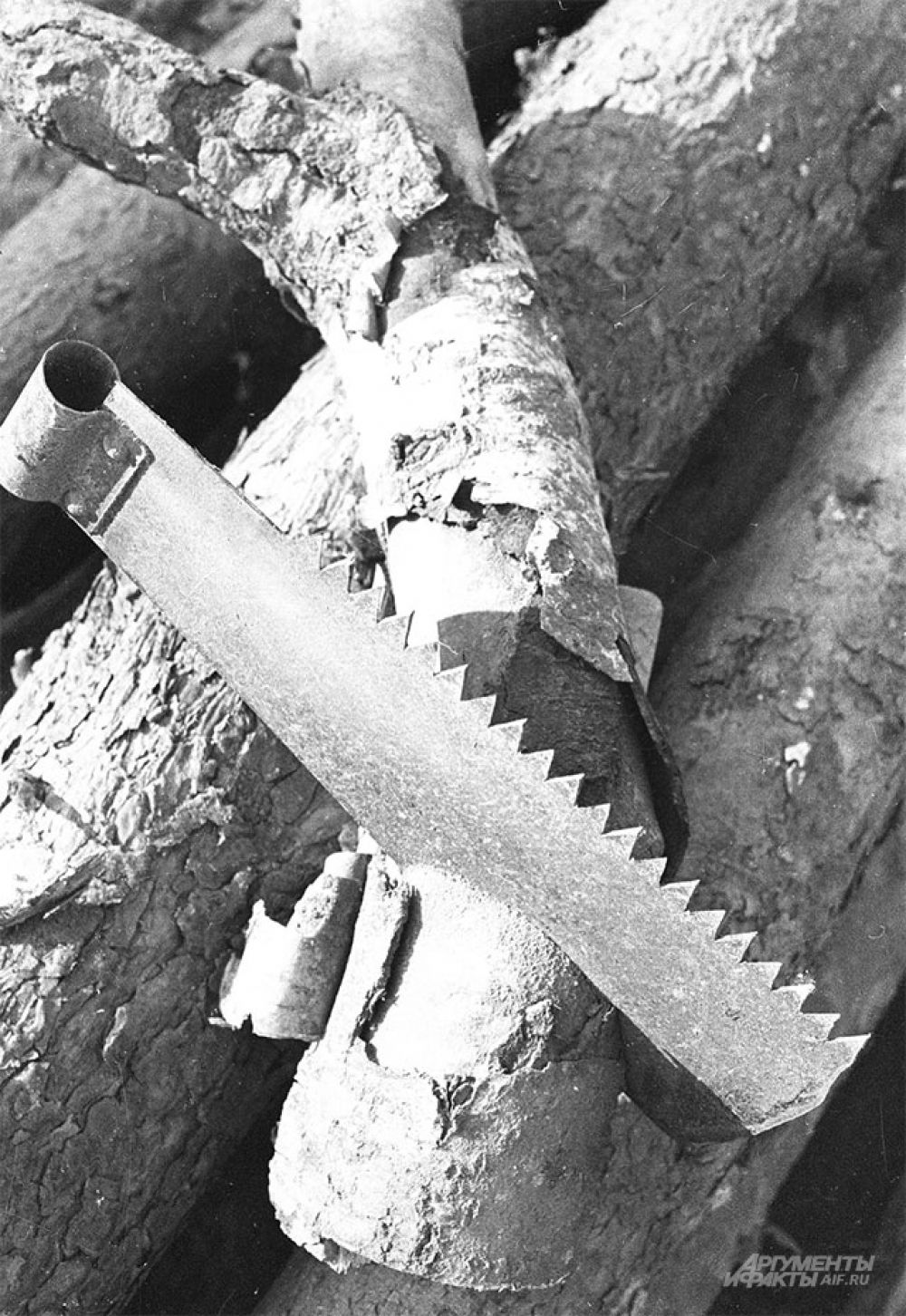 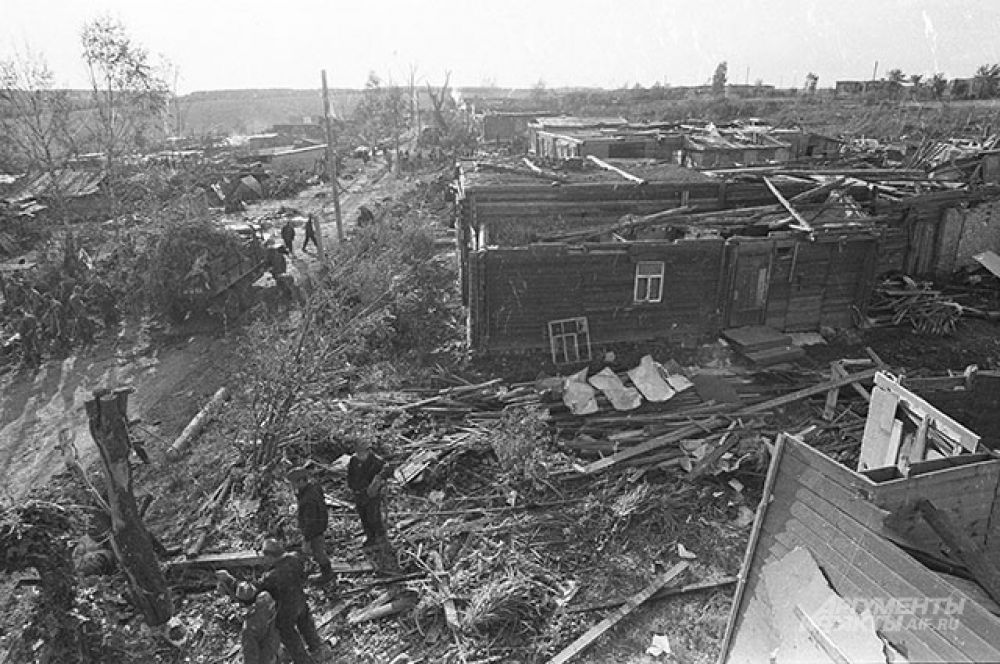 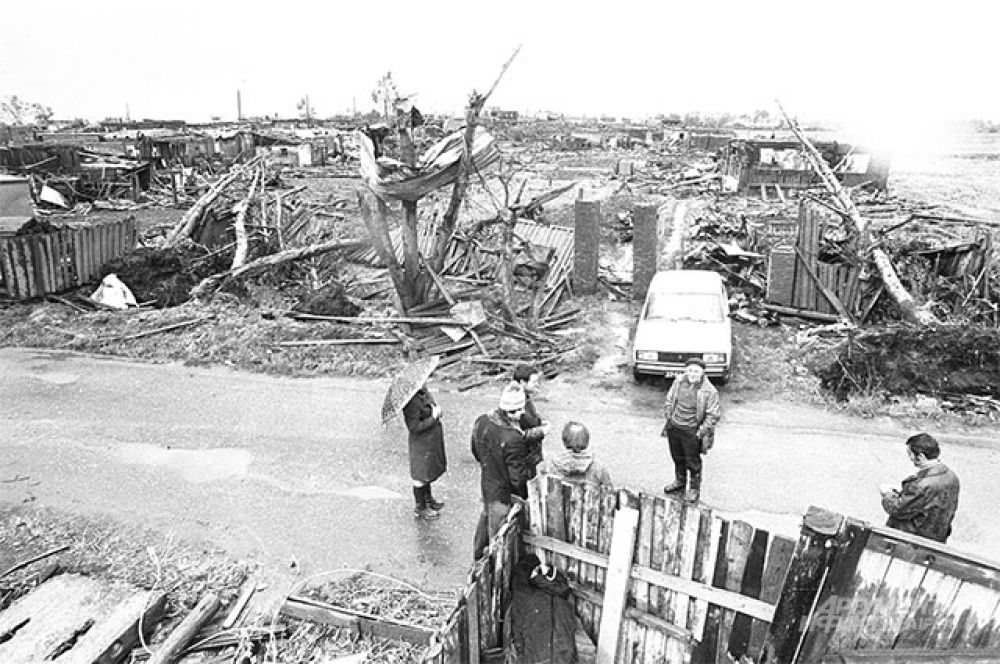 In one of the city hospitals schoolgirl Olenka Zelenina told me the story of her miraculous salvation. Together with her parents, she rested in the holiday village. While they were on the beds, a gust of wind carried their house along with Olya for a distance of more than a kilometer, carefully placing the dwelling in the field.

Then, in the Ivanovo region, 680 residential buildings, 200 industrial and agricultural facilities, 20 schools, kindergartens, forests suffered, 416 families were left homeless, 500 summer houses were destroyed. The entire Soviet Union helped to eliminate the consequences of the tornado.