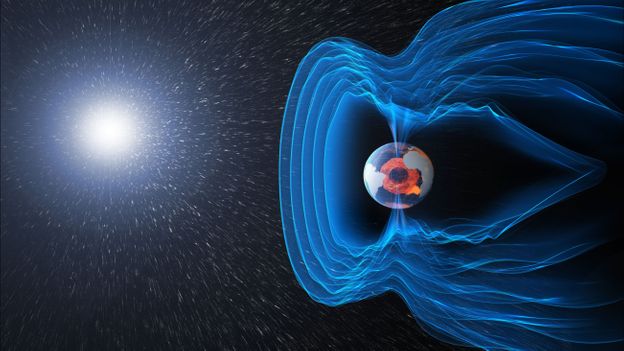 The topic of a possible reversal of the poles, although rarely, is mentioned in the official media, but this is not the only real threat that brings humanity to the brink of complete destruction. The polarity reversal is a disaster, but the complete shutdown of the magnetic field is the Apocalypse.

It worries me that in every scientific discussion I’ve read about the Earth’s magnetic field, one aspect is consistently either overlooked or ignored, namely the collapse of the magnetic field.

Even studies that really talk about the acceleration of the fall in the magnetic field strength bypass the problem of the inevitable collapse of the field, as if it had not yet come to this.

We hear about an accelerating decline in the strength of the Earth’s magnetic field, but this is usually spoken about almost rhetorically. The truth is, this is not a rhetorical phrase at all.

Theoretically, the creation of the Earth’s magnetic field occurs due to the circulation of the liquid iron core. Due to the induced electric currents, this circulation maintains and amplifies the existing field, therefore it is a positive feedback mechanism. When the field begins to decrease, it means that the positive feedback mechanism has already begun to fail, starting from the moment when the field initially began to decrease. A fair analogy is a top that has already begun to swing and fall.

The magnetic field being in decline (decreasing its power) is not stable and this process can sharply accelerate, if only some other mechanism does not work, which we do not know about. Since science has no idea about this secondary mechanism, and geomagnetic features in the earth’s crust do not suggest this, it should be assumed that such a mechanism does not exist at all. Taking this into account, the decay of the magnetic field should be considered as exponential in nature (an increase in the magnitude when the growth rate is proportional to the value of the magnitude itself).

Science loves to powder the brains of people and for this either publishes scientific materials in a language that is not at all understandable to ordinary people, or it releases a series of scattered studies, while in essence it is a study of one phenomenon and in order to see the picture in its entirety. the reader should read all the individual articles in order to understand the essence of the problem.

Solar activity, the Earth’s magnetic field, the Earth’s climate – all these components are one whole and are closely interconnected.

Solar activity is at a minimum, a new solar cycle has not begun, this has a direct impact on the Earth’s climate. Low solar activity = ice age.

At the moment, all of us – people, all living things on planet Earth – are in fact in a large microwave oven, where the switch is on for heating.

Ice ages are associated with the collapse of the magnetic field, which can occur in a very short period of time. Once the magnetic field drops to a certain critical level, it will simply collapse to zero because it cannot continue to fight its own fall.

Question: living in a digital age that is growing in complacency and hyper-optimistic future earthly utopia, what would be the impact, if possible, of a fleeting moment of polarity reversal? Would that be the end of the bitcoin foolishness?