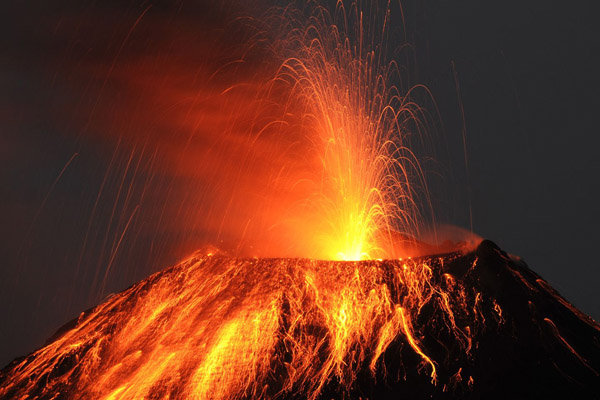 We have a plan when an asteroid will be on a collision course with the Earth, but the threat of super volcanoes has remained relatively unnoticed. Should we do more to prepare for a distant but inevitable volcanic winter?

At the moment, NASA claims that no known asteroids threaten the Earth in the next century. Of course there are unknown asteroids that can strike an unexpected blow, but at least 98 percent of near-Earth asteroids are accounted for and tracked.

This is great for preventing the real panic of the cosmic Apocalypse in the real world, but potentially a much more serious threat is much closer to our home called Earth. This threat is hidden right under your feet …

There are about a dozen super-kulans on Earth. If one of them explodes, it will throw a huge amount of sulfur into the atmosphere, hiding huge areas of our planet in dust and cutting off sunlight. Without the sunlight, the Earth will cool down. Pishevye culture will not grow. People will starve and die.

No one living on this planet has experienced such a volcanic eruption. The last was 74,000 years ago on Mount Toba on the Indonesian island of Sumatra. Researchers believe that the explosion erupted in ashes in a radius of 4350 miles. An eruption of this size can throw aerosols into the atmosphere (fog, dust and geyser steam), zpigruziv us in the volcanic winter. This will reduce the global temperature by several degrees and radically change the climate.

In the northwest of America, magma bubbles accumulate beneath the earth’s crust in one of the largest and most dangerous super-volcanoes in the world – Yellowstone. Scientists believe that the plume of magma rises from the very center of the Earth to feed the volcano of the Yellowstone National Park. Known as a hot spot, this molten lava caused three explosive eruptions in the last 2.1 million years. These eruptions created large volcanic craters, known as calderas. The largest caldera on Earth is now located in Yellowstone. 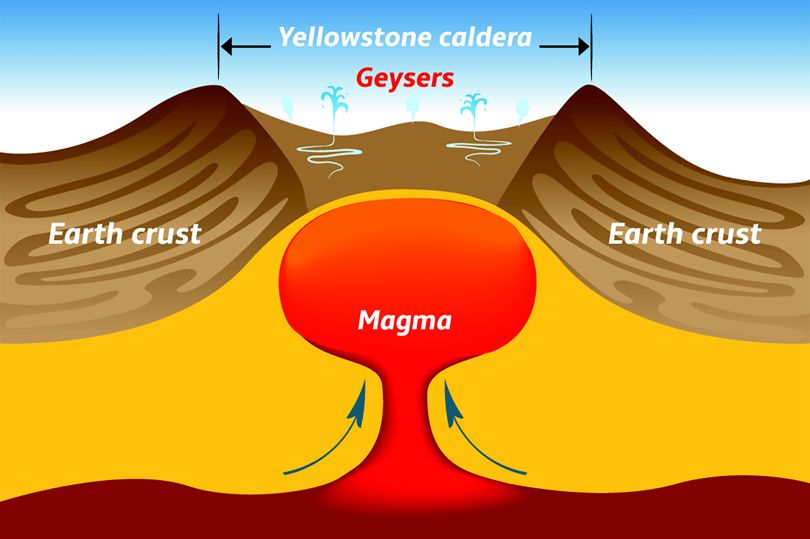 “The Yellowstone volcano has the potential to truly create global chaos,” says Rosalie Lopez, volcanologist and manager of the planetary science section of the NASA Jet Propulsion Laboratory. However, scientists believe that a super eruption in Yellowstone is unlikely. Tomorrow this will not happen, and the chance to even witness this in our lives is infinitesimal. But should we and can we create a plan for mitigating the consequences of a potential eruption?

The short answer is: we do not know. We do not know if we have the opportunity or the technology to stop such an event, and whether it makes sense to try to do it. Any attempts can only increase the problem and potentially even cause the eruption itself.

“We are unable at this time to prevent the eruption of a large volcano,” says Jefferson Hungerford, a geologist at Yellowstone Park. “How do we stop the eruption? The fundamental premise is to take energy out of the system – that energy is heat, and we can not do it right now. ” Covering 3,472 square miles and three states (Wyoming, Montana and Idaho), there is a lot of energy in the Yellowstone caldera. Incredibly many!

Asteroid impacts, which leave craters less than two kilometers wide, occur twice as often as volcanic eruptions, but these super volcanoes can cause catastrophic destruction on our planet. Brian Wilcox, a senior engineer at NASA, was part of the group to protect the Earth from asteroids. He realized that it was time to turn his attention to the super volcanoes. He assembled a team at the Jet Propulsion Laboratory at NASA, including Lopez, and they began preliminary development of some calculations through modeling. They wondered – could we drill this volcano to mitigate the super eruption?

“It was just an idea, if you can use the technology that we have now to cool the magma chamber and, therefore, prevent the eruption,” says Lopez. As an example, Yellowstone was used to study them, but the work is applicable to any superculan. These eruptions are defined as higher or equal to the magnitude of the eight in the explosion index of volcanoes.
The idea was to drill a ring around the magma chamber, and then start pouring water there, so that it circulated and cooled the magma chamber. This hypothetically releases pressure from the magma loop and cools it. This in itself will take about 50,000 years, says Lopez.

Michael Poland, a scientist at the Yellowstone Volcano Observatory and Hungerford, criticizes NASA’s research, and Lopez very much wants to emphasize that this was never a plan. It was nothing more than a hypothetical study.

“It was just a hypothesis that became a sensation,” says Hungerford. “This idea is fraught with big problems”. Poland and Hungerford also agree that if Yellowstone should break through, it will be more a lava flow than an explosion, as it was 70,000 years ago. The best tool we have now is just to closely monitor the activities of Yellowstone. According to experts, there are no signs of an impending eruption. “We are watching the Yellowstone volcano, looking at the swelling of magma in the volcano, seismicity, gas emissions and changes in heat from the system. None of the signals is approaching the assumption that any volcanic activity will be in our future, “he says.

“Various studies have shown that most of the magmatic chamber in Yellowstone is fairly calm,” says Lopez. So, why bother with such an expensive and risky plan, if in fact there is no threat of eruption? Because, Lopez believes, Yellowstone has the potential for a cheaper and cleaner future energy.

“Perhaps we could use the Yellowstone magmatic chamber as a source of geothermal energy,” she says. This has already been done successfully in Iceland, where at present geothermal energy facilities produce 25 percent of the total electricity production in the country.

There is also the question of whether or not Yellowstone should focus all our efforts. While researchers do not expect a super eruption in this sector, other supervercans are just as dangerous, albeit on a smaller scale.

“Even if it were possible, it would be better to focus on volcanoes that explode more often and threaten a larger population,” Poland says. The Mount Agun volcano is about to explode.

Experts warned that the largest volcano in Iceland, Bardarbunga, is ready to break out again.

Millions of people also live around Vesuvius, near the city of Naples in Italy. The volcano, which destroyed Pompeii in 79 AD, is activated every few decades. “Eruptions from Vesuvius are much smaller than those of Yellowstone,” says Poland. “Therefore, if there was an opportunity to stop the eruption of the volcano, this is a volcano that will require attention.”

Campi Flegrei and Mount Vesuvius in Italy are studying Dr. Luca Siena, who is also a professor at the Department of Geology and Geology of Petroleum at the University of Aberdeen. “The NASA plan is probably less risky than what was done in the past in Campi Flegrei, where the well was drilled near the city,” he says. “As the earth is very hot, drilling did not go well – after 500 meters the borer broke.” Despite this, he is still a fan of NASA’s idea of ​​continuous progressive drilling. “We must do much more than what we are doing now to try to prevent the over eruption,” he says.

“These volcanoes will explode one day and this can happen through
100 years, 1,000 years or even 10,000 years. And if we do not do something to reduce the danger of these volcanoes, we will not be able to survive on the surface of the Earth, “says Siena.

He talks about the state’s unwillingness to finance something that will not affect this generation, and the possibility of over eruption is not on the political agenda right now, when there are many other immediate threats. “This is not a problem that we can experience tomorrow, in a year or 100 years, but, of course, the problem is that if we do not solve it now, it may be too late,” he says.

But if we start seriously scrutinizing our ability to mitigate beyond the eruption, we need to improve our visualization methods, “says Siena. “We can not see inside the Earth the way we see through the window,” he says. “We must get the best image of the upper structure of the volcano. Once we know what’s there, then we can go ahead. ”

Scientists agree that the best way to predict an eruption is to understand the behavior of a volcano. “We are still trying to figure out the variables that lead to an eruption at a depth,” says Hungerford. If the conditions in Yellowstone really begin to change, it is the work of Michael Poland that initiates a plan for responding to hazardous events from his observatory in Vancouver, Canada.

“If there were disturbing changes, it would probably start with a few letters to other workers at the Yellowstone Observatory to make sure that these changes are not an instrumental or seasonal artifact,” he says. “Then we will discuss what this activity can mean: is it happening outside the historical norms and what will be the result.” 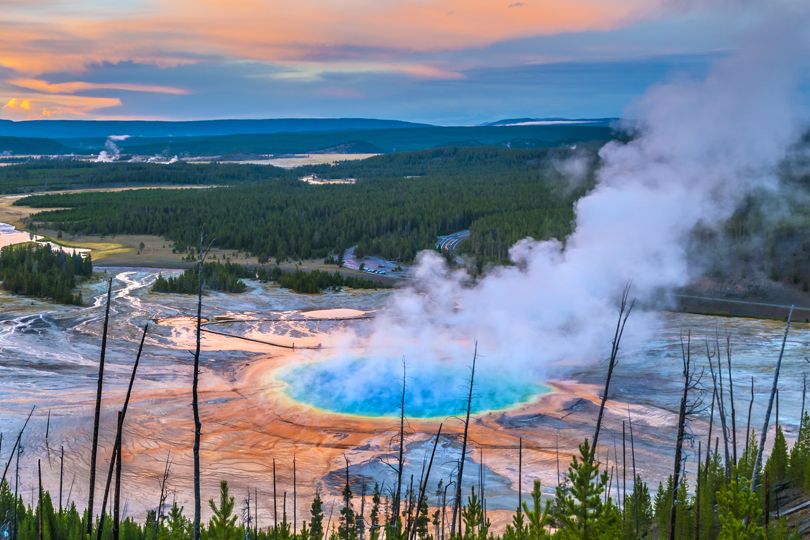 If they confirm that this could be something to worry about, they would have informed the whole world about it. “If something accelerated to a level of activity that was truly unprecedented and characteristic for what we expect to see before the eruption, we would adjust the warning levels for the volcano.” Changing alert levels is not done lightly. “Yellowstone’s warning levels have never changed from the lowest levels, because we’ve never seen anything that really indicates a possible eruption.”

But, offering one of the 700,000 annual chances of an eruption on this site, Lopez and Siena still think that it makes sense to explore other options.

“If 50 years ago someone would say that an asteroid is approaching Earth, and we can not do anything about it, they would be right. We would not understand that this is possible. But now there are possible ways, “- says Lopez. “This is a task for several generations. We do not yet know what future generations will be able to do. “