The throwing-up Kamchatka volcanoes it is visible from space 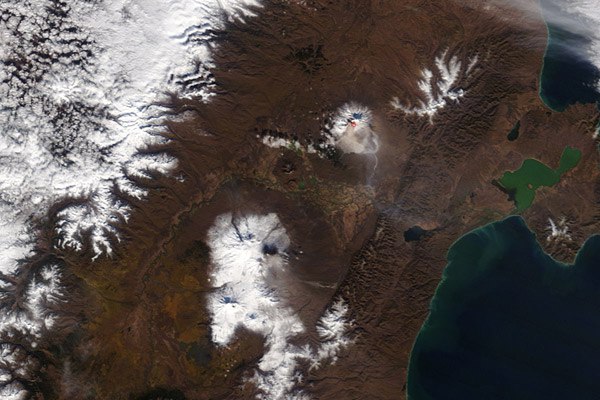 On Kamchatka these days eruption of two giants neighbors — volcanoes Shiveluch and Klyuchevskaya Sopka continues. One, other giant release into the atmosphere ashes on height to 6-7 km. Nevertheless, because of activity of a volcano the “orange” code of aviation danger urging captains of aircrafts to change the direction and to fly about a volcano and its loop the party is entered.

Eruptions of Shiveluch and Klyuchevskaya Sopka “have the day before caught” satellites. At first Klyuchevsky’s eruption (the highest active volcano of Kamchatka) has been registered by the Russian Stork-2D satellite, and then the American Terra satellite could record eruption of both volcanoes (by means of the MODIS device). In a picture not only smoke loops from a volcano, but also even a lava stream are visible.

Satellite picture of the throwing-up volcanoes (from the Terra satellite for October 7, data of NASA).