The tropical cyclone Gita hit the islands of Tonga 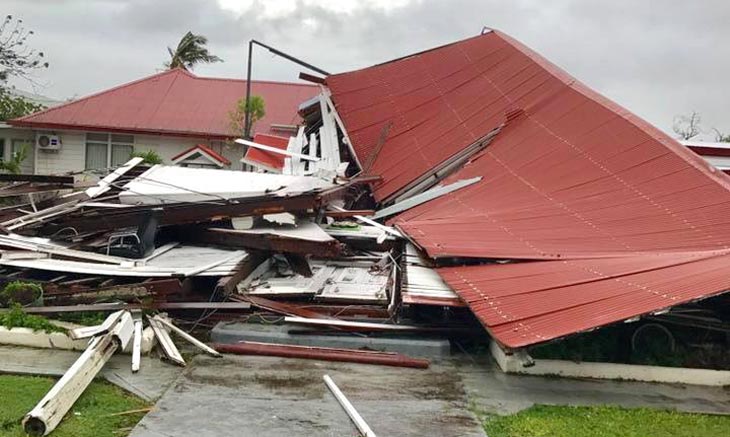 70% of homes and buildings in the capital of the Kingdom of Tonga Nukualofa were completely or partially destroyed as a result of the impact of the tropical cyclone “Gita”, which last night passed over the islands of this small Pacific state.

As reported by the New Zealand radio, information about the victims of the elements has not yet arrived, at the same time dozens of people have applied for medical help. Many low-lying areas of the islands were flooded, there is an acute shortage of drinking water in the country.

According to New Zealand meteorologists, during the passage over the country’s territory the cyclone “Gita” was the 4th power category, the steady wind speed near its epicenter reached 54 m / s. Currently, the “Geeta” continues to move west, is gaining strength and is approaching the islands of Fiji. According to forecasts of meteorologists of this island state, “Gita” will approach the Fijian islands on Tuesday evening, and it will be a tropical cyclone of the fifth, highest, power category.

It is expected that the steady wind speed near the epicenter will exceed 60 m / s. Fijians hope that the “Gita” in the next few hours will change the direction of the movement and take place just south of the main islands of their archipelago.

The Kingdom of Tonga is located on 170 islands in the southwestern Pacific Ocean. The total land area of ​​Tonga is about 750 square meters. km. Most of the islands scattered in the ocean in tens and hundreds of kilometers are uninhabited. About 107 thousand people live in the country, about 70% of them live on the main island of Tongatapu.

The Republic of Fiji is located on more than 330 islands of the eponymous archipelago to the west of Tonga. More than 900 thousand people live in the country. More than 100 Fijian islands are uninhabited, while approximately 85% of the population lives on its two largest islands, Viti Levu (over 70% of the total population) and Vanua Levu (about 15%).

Last Sunday, the cyclone “Gita” touched the edge of the island of Samoa and American Samoa, which led to large-scale floods in this archipelago.