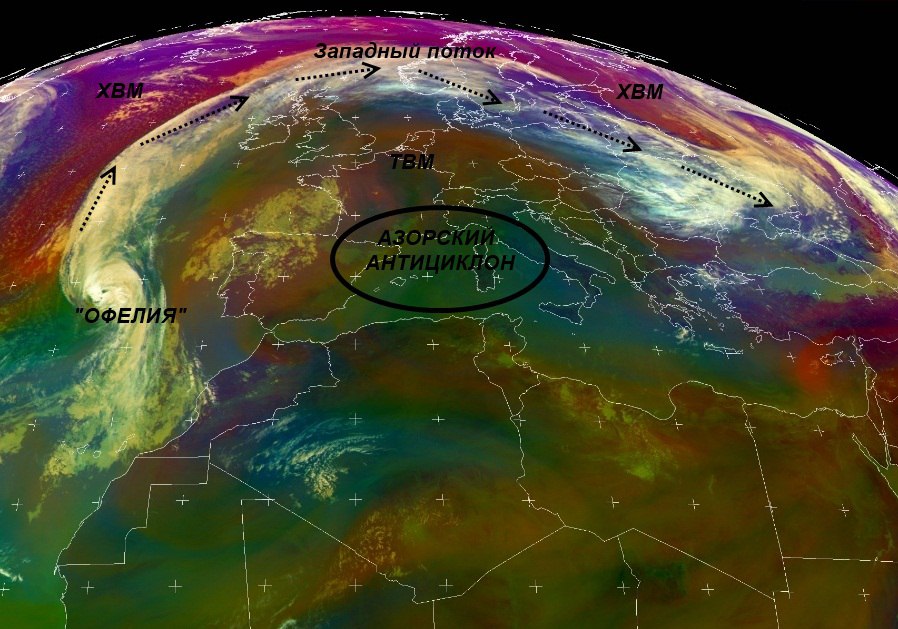 The tropical hurricane “Ofelia” became the most eastern hurricane ever recorded in the Atlantic Ocean (1851-2017).

As a rule, tropical hurricanes move along the western periphery of the powerful Azores anticyclone (subtropical ridge) along the S-3 leading stream to the CB (planetary circulation cell of Ferrel) and simply physically can not move much eastward to the Azores. This time, the Azores anticyclone, shifting towards South Europe, “bared” the eastern part of the Atlantic, thereby allowing “Ophelia” to go quite far.

If previously the eyes of tropical hurricanes could be observed using geostationary satellites GOES-16 (West Atlantic) and Himawari-8 (Western Pacific), now the “eye” is fixed by the European geostationary meteorological satellite (EuMetSat), which is extremely unusual .. In addition, the convergence line (the convergence of winds from different directions), which stretches from the tropical hurricane right up to Ireland itself, is clearly visible, and which is visible from the satellite as an extended cloud array.

Thus, we have near the subtropical Azores not a high-pressure zone (anticyclone), but a tropical cyclone; in the south of Europe is not the middle of autumn, but anomalously warm, in Spain abnormally hot weather (up to +34 ° C); a significant disruption of the western air mass transfer (WFSV), expressed in dry weather in Southern and Western Europe and rainy and cold in the East.