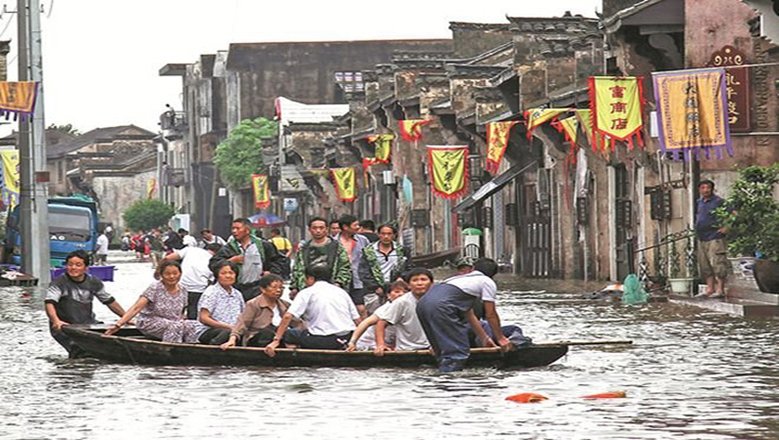 The water level in the Amur near Khabarovsk and updated forecasts of hydrologists will rise in July – August to 430 cm, possible flooding problems due to discharges from hydroelectric and cyclones in China.

In August 2016 we are concerned about in the first place, China, because this is the Typhoon season, and from there can go a considerable flow of water. Collaboration with China is established, we receive daily information on the 14 hydrological stations with China”, – said at a meeting of the Commission on prevention and liquidation of emergency situations in the Khabarovsk territory head of the far East UGMS Vyacheslav Parshin.

According to him, in July – August the water level in the Amur near Khabarovsk as the main indicator characterizing the situation in the whole region, rise up to 430 metres, there may be adjustments to the forecasts to see 500 in Addition to expected in China, cyclones in the water level of the river can affect increase several times the discharges from Bureyskaya HPP.

At present, according to V. Parshin, on the rivers of Khabarovsk Krai saved increased water availability, while flooding threats are no economic projects with the flooding of low-lying floodplain.

“The main high water level is marked on the middle Amur, and lower Amur. Unlike 2013 when there was a massive flood on the Amur – if), upper Amur – near normal and below normal. And yet safe environment in China – the rivers Sungari and Ussuri rivers have seen a slight decline and water levels near normal. Up to 500 cm are unlikely to reach,” said Vladimir Parshin.

According to far East UGMS, water level in the Amur river near Khabarovsk on 13 July is 369 cm, adding the per day three see To the end of the week, the projected increase in the water level of 370-380 cm

As noted by V. Parshin, currently under daily monitoring of the water level in the rivers of the region, tracked discharges from Bureyskaya hydroelectric power station, precipitation on the middle and lower Amur.

The regional GU Ministry of emergency situations, according to the Deputy head of the Ministry Alexei Fomkina, modeled the possible situation of flooding at critical water levels in the rivers.

“At 400-430 cm flooding homes, transport and industrial infrastructure of Khabarovsk and the settlements located down the Amur river, do not expect”, – said A. Fomkin, adding that possible flooding of cottages on the left Bank of the Amur river and on the Islands of Bolshoi Ussuriysky, Cable and Suburban, where there are about three thousand houses.

As explained by the Director of the Institute of water and ecological problems, Feb RAS Boris Voronov, accurate, correct for the increase in the water level in the Amur river in summer-autumn 2016 impossible.

“The current flood is formed according to the classical scheme, for Cupid is characterized by the formation of local areas of higher water content and very rarely they merge into a kind of a wave, as it was in 2013. It is hoped that catastrophic floods will not, but that the flood will be high – about five feet – it is unambiguous”, – said Boris Voronov, adding that the river is in a period of big water and there is still seven to ten years from “such surprises.”

According to him, it is necessary to create a map of flood hazards or potential areas of flooding across the Amur region. Among other proposals – the creation of a single structure, Institute of Amur, which would study the problems of formation of water regimes of rivers, consolidating the efforts of researchers in several regions as well as China and Mongolia.

A massive flood on the Amur, which hit historical highs that occurred in the summer of 2013. Suffered severe damage to three regions of the Far East – Khabarovsk territory, Amur and Jewish regions. The total area of flooded areas, including homes, businesses, roads, amounted to more than 8 million square kilometers. The water level near Khabarovsk made up 8.08 m. at the historical mark of 6.42 meters and critical 6 meters.