The Ufa was hit by hurricane 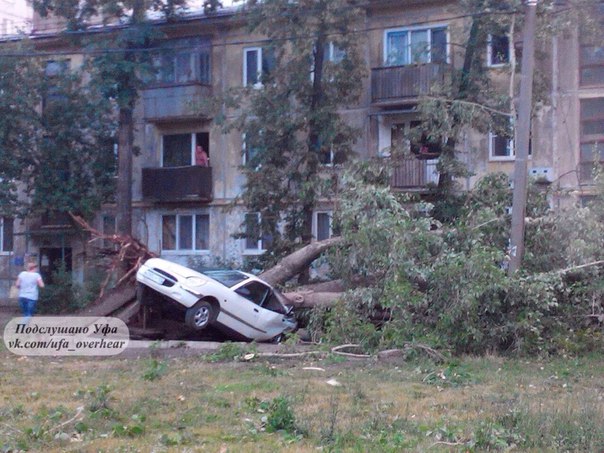 The Ufa collapsed real disaster. Sudden rain storm and strong winds caught unawares, and the citizens and emergency services. The city’s traffic lights don’t work. Now emergency crews are trying to bring the street to the right. We also learned that there are victims.

According to eyewitnesses, the storm hit the Ufa unexpectedly. As reported in Bacherolette, the wind gusts in the city reached 17 meters per second. But on the outskirts it reached 27 meters. The impact of elements occurred in all areas of the city where old trees fell on houses and cars, where roads literally drowned in rainwater flows.

In the centre of Ufa, Gogol street maple tree blocked the roadway and damaged several cars. Seriously injured and a passing woman who was hiding from the rain under a tree. She’s got a broken head, a woman’s unconscious had to be hospitalized immediately.

Now shots of the raging elements, citizens actively share in social networks. The photos can be seen on the street Engine builders heavy pine could not resist the impulse, broke in half and fell on the BMW. Deme a similar incident with a white Toyota. The tree literally was uprooted.

Also there are reports of flooding. In the Central part of the city streets Validi, Pushkin, Karl Marx, the roadway began to resemble a mountain river. Storm drainage could not cope with a large flow of water and on the streets of Sochi, the Caucasus and Pugachev, they were flooded knee-deep. Partly were flooded and sidewalks – there was a large puddle.

Now the water from the streets gradually come down, but the rain can begin again. According to meteorologists, this weather just typical of the end of the first month of summer. Winds, storms and hurricanes, forecasters are predicting in the coming days. It seems that June doesn’t want to give up without a fight, over the whole evening Ufa again thunder and lightning.