The US is waiting for the “Great flood” 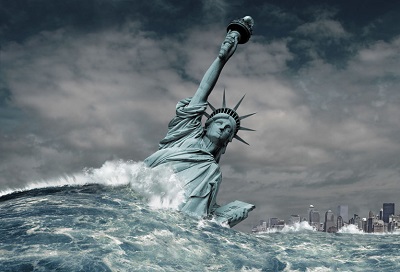 2 million homes in the United States will go under water by 2100 if scientists can find a way to stop global warming. About 300 of cities lose about half of the housing stock. To such conclusion company Zillow real estate throughout the United States.

The company has reviewed the location of residential areas and found out which of them are most close to the sea. Then, comparing data on buildings with NOAA predictions regarding the rise in global sea level, the realtors made a map of the buildings that will not survive the changes in the coastline.

According to recent estimates, by the end of century rise in global sea level of approximately 30-120 cm For their predictions Zillow used the most pessimistic scenario in which the rise can be up to 150 cm.

In this case, nearly two million homes will be flooded, which will bring the damage to about $882 billion. (For comparison: this year in the United States was built one million homes).
The greatest losses in Florida and Miami: in the first state will be flooded every eighth house, and the second risk will be 30 % of the housing stock.

And the world community, and the U.S. government take action to protect the planet from global warming. Perhaps the joint efforts of lifting of level of world ocean will be able to slow down or pause. However, the chances of success cannot be called absolute. For example, the target set for the climate conference in Paris, to prevent growth of global temperature by more than 1.5 degrees Celsius compared to the temperature of the pre-industrial era — is unlikely to achieve.