The victim’s “meteor of war” 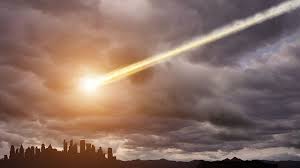 Scientists say that the odds of dying from falling of the meteorite is negligible, and that such cases are rare. Alas, they are mistaken or just trying to reassure us.

In the afternoon of 6 February 2016 on campus Bagratids in the Indian state of Tamil Nadu was rocked by a powerful explosion.

– I’ve never heard such a sound, – said the rector Haneji Bhaskar. – The building shook for almost a minute. I ran outside with the students and teachers. There rose a cloud of dust…

People who came running to the scene, saw a terrible picture. In the middle of the lawn near the cafeteria gaped shallow funnel. The bus driver of the College, the 40-year Kamraj, lay nearby. From the first sight it became clear that something was wrong: his skull was fractured. Two gardeners and a student who is late to class, escaped with minor injuries. All glass within a radius of 400 meters knocked out by the shock wave.

The ambulance managed to drop off Calradia to the hospital. Doctors from Natrually could only state the death. During the autopsy they were looking for bomb fragments, but no metal fragments in the body of the deceased was not. Arrived on the scene, the bomb squad came to the conclusion that the lawn was a meteorite.

Learning about the incident, the Governor of the state has provided the family Kamrada assistance in the amount of 100 thousand rupees (at the time about $ 1,500). The wounded received 25 thousand rupees.

Astronomers did not believe that a meteorite killed the man. They said that the funnel is too small, the meteors usually explode in the sky, not from hitting the ground, and before they fall you can hear the thunder. But Indian scientists are examining the samples under a microscope confirmed the death of the guilty driver chip space wanderer.

The death of the driver was the last link in the chain of tragedies that struck from the sky India. February 22, 2007, the meteorite fell in a field near the village Banala in Rajasthan. Three people were killed and four wounded.

29 Sep 2003 directly into the village Subcode in Orissa meteorite fell, causing fires and destruction. Two houses burned to the ground. 20 people were injured, one was killed – though not from a direct hit. 75-year-old Sukadev Singh received severe burns trying to save the house, and then died in hospital.

That hit the village the stone was part of a huge car, which rushed over the country.

It light for a few moments night turned into day, ” the residents said.

One of the elderly blind, unable to bear bright light, a few people fainted from fear.

A similar case occurred on October 12, 2008, when a huge meteorite fell in Kashmir, having tumbled down more than 200 trees. Lighted it fragments the flames engulfed the village Churaman. No one was hurt, but the people have lost 79 houses, 58 barns with cattle, eight shops and a mosque.

In 1810, a meteor shower burned five Indian villages in the district of Shahabad, killing several dozen people. The British authorities did not bother to count the exact number of dead natives.

Victims of the Chelyabinsk meteorite

All suffered 1613 people, most from broken glass. Was hospitalized according to various estimates from 40 to 112 people.

Material damage to the public sector and the population amounted to 490 million rubles, the total amount of damages (including industrial enterprises and facilities of Federal subordination) — about 1 billion rubles. From 15 February to 5 March 2013 in Krasnoarmeisk, Korkino and the Uvelsky district of the Chelyabinsk region introduced a state of emergency.

“Nearly three thousand of apartment houses in varying degrees, suffered from explosions, damaged Windows: of the 41 medical institutions 34 hospitals and clinics, 361 children’s institution — kindergartens and schools. In total, according to preliminary estimates, the Chelyabinsk blast was broken more than 100 thousand square meters of glazing,” said the head of city administration Sergey Davydov.

The blast from the falling fragments of the meteorite blew out Windows in many office buildings in Chelyabinsk.

“At the time when it happened, I was near the window, it shattered from the blast, I managed to close the head, face now a couple of scratches, and a slightly crushed hand. A colleague was less fortunate — the scratches were deep and had to have stitches,” he told eyewitness Svetlana Popova.

The blast over Madrid

Disasters involving meteorites occur not only in remote rural areas of India. 110 years ago in the capital of Spain was something that rivals the recent developments in India in the number of victims and destruction.

Above the city there was a meteor of enormous dimensions, throwing out a strong light, ” wrote the St. Petersburg magazine “world illustration”. – At an altitude of 32 kilometers it burst with a tremendous roar. All the houses trembled, and the weight of the window glass crashed.

In the city there was confusion and panic. In one of the tobacco factories workers, thinking that a large earthquake happened, let the time run and started to crowd on the stairs. Last, do not bear the weight, collapsed, and 17 people received severe injuries and wounds, and one was killed. In the city there were many other accidents. One house collapsed completely.

In some schools crowded together at the exit of the children have received bruises. In the Palace of the Embassy of the United States struck the wall and fell all the window glass… Found a few more large pieces of stone. Many merchants closed their shops, and in the suburbs of panic still hanging on. The roar and crackling was heard at a distance of several kilometers from the city.”

10 small pieces of the meteorite have been preserved to our days. The largest fragment is in the National Museum of natural Sciences. It weighs 143 grams.

From meteorites seriously injured at least three capitals. 15 Aug 1951 in Tehran hit the stone rain, destroying 62 homes. Killed 12 residents, 19 were wounded. Over 300 head of cattle were killed by a direct hit or the subsequent blow from the sky by fire. In 960, a meteorite exploded over Dublin, killing 1,100 Irish. According to the astronomer Yuri Lobanovsky, the power of the explosion described in the Annals of Ulster, was from 10 to 25 megatons.

Heavenly surprise that had fallen in southern Serbia, almost cost the newlyweds life.

In the village of Sychar to the Church was heading the wedding procession. Suddenly on the wagon, riding behind the carriage of the bride, a meteorite fell. One was in her peasants was crushed by the red-hot stone.

Sitting next to a woman seriously wounded. The panic rose. All members of the Bridal train began to run. The bride lost consciousness. And yet after some time, the wedding took place… in an empty Church. The peasants saw in the incident a bad omen and were afraid to come.

Caught in a wagon meteorite remained hot during the day. Its diameter was about 40 centimeters.

“Recently tried to prove that there was not a single case of death when falling meteorites. Mr. Babin, son of Professor Lokier, sent to the French Academy of Sciences a note on this case, and a piece of meteorite. He fell in America near Roquefort and punched in the roof a hole with a diameter of one meter and a half, killed two people…

In 1647, the Swedish sailor Olaf Erickson, Willman described the case when the deck of the ship dropped a stone weighing eight pounds, killing two sailors. Mr. Warden announced to the Academy that this story took place in Georgia in 1826, when a meteorite was the cause of death of several people; moreover, in July, 1829, an Indian by the name of Elika died in the same way”.

July 2, 1839, a farmer from England, was killed by a direct hit of a meteorite. “The stone guest” went through his hat, and, “knocking the piece of cranial bone, hit in the leg, and then buried in the ground.”

Another farmer died in his bed -a meteorite struck the hut through, fatally wounding its owner.

The newspaper “evening post” for may 17, 1879 wrote that Leonid Grover of Covington, Indiana, “broke like a shot from a cannon. Digging up the ground under a broken bed and the floor, the Sheriff took the stone of pyramidal shape.

October 12, 1898, a few pieces of the meteorite fell in Perry, Oklahoma. One fragment weighing more than 200 kilograms hit the building, killing two children and wounding other family members.

On land the meteors were rarely claimed more than one victim at a time, but at sea the situation was worse. Heavenly wanderer can send to the bottom of the whole vessel.

In 1908, sank the sailing ship “eklips”, pierced by a meteorite. Sailors extinguished the fire, but the hole they repaired failed. After four days with the pumps, the crew left the ship and moved to the boats.

The captain of the Eclipse decided to sail on boats to Hawaii. Victims of the crash had to travel 900 miles. The sailors reached the coast in 17 days. From the entire crew survived 13 people, the rest died on the way from hunger and thirst.

The same fate befell the Atlantic ocean in the sailing vessel “Sagittarius”. After the impact the ship went to the bottom so quickly that the team barely had time to lower the boats into the water. This time, fortunately, no one died, and the crew was picked up by a passing steamer.

Equally dangerous is electromagnetic disturbance that frequently occur during the flight or fall of a meteorite. The currents induced in the wiring can cause a fire or damage the instrument. In 1910, the meteorite fell near the side of the ship “Trafalgar”, making his compass useless junk.

We saw a huge fiery body with a tail – said the captain of the ship. -With a loud whine it fell near the ship, vzmahnuv the water column. This same moment came the sailors from the forecastle, saying that it burns. Everything inside him was shining with a radiant light. The effect in the engine room was even more impressive. It lit up a dim purple light, pierced with millions of sparks.

All of the men ran out on deck. The second mate received a strong electric discharge from the iron rod, which he held in his hands. The phenomenon lasted for a few seconds. Recovering himself from his surprise, we saw that the compasses degaussed and give incorrect readings.

I decided to return to the nearest port. Due to the snow storm could not see any dig. Finally, we met another ship and, following him, arrived in Falmouth.

The precaution of the captain saved the ship from disaster. May 31, 1910, after a couple of months, “the Trafalgar” burned down in the ocean near Bombay. Perhaps the incident with the heavenly visitor was not in vain for the old wiring.