The Vrancea seismic active zone can provoke a powerful earthquake 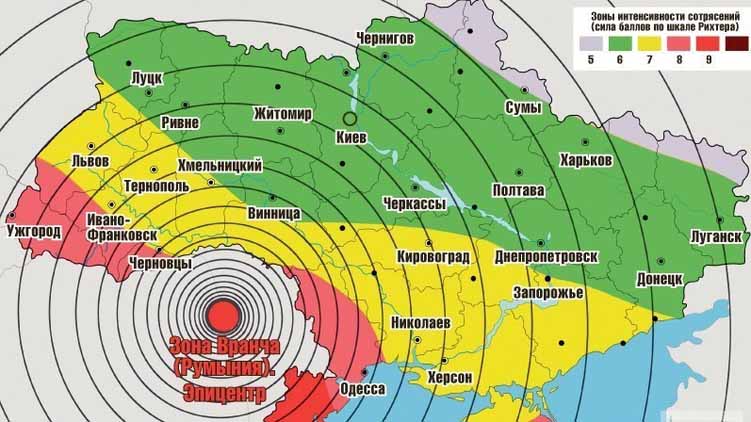 The Vrancea zone is a unique seismically-active area on the European mainland, located at the junction of the Southern (Romania) and Eastern (Ukrainian) Carpathians in the Vrancea County, Romania. Within its boundaries are the sources of earthquakes located in the consolidated crust, also in the upper mantle at depths of 80 – 160 km. The biggest danger are arising in the vast depths. They cause the quaking of the earth up to 8-9 in the epicenter of the terrain of Romania, Bulgaria, Moldova.

Earthquake. Beginning in 1107 till this day there there were 90 earthquakes of intensity 7-8 points. In the twentieth century in Vrancea zone 30 earthquakes with magnitude 6.5 and above. Earthquakes with a magnitude of 7 points in 1940 and 1977 had tragic consequences. So, in 1977 in Bucharest, which killed 15 thousand people. Carpathian earthquakes extend to a considerable area. In 1940, vibrations were felt in the area of 2 million km.

The largest magnitude earthquakes in this seismically active area achieves 7.6 points. The sources of earthquakes located in the consolidated crust also mantle at depths from 80 to 190 km Thanks to the huge depths and magnitude, the earthquake zone of Vrancea appear on a large area from Greece in the South to Finland in the North. 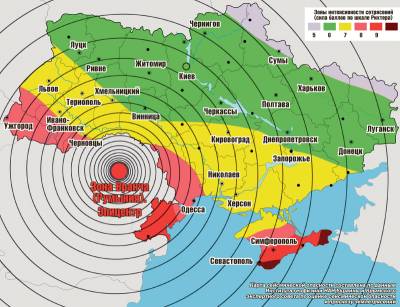 In Ukraine, perhaps it will be a major earthquake. The cause of the cataclysm will be seismic activity in the Vrancea zone (Romania) – the so-called extremely dangerous area at the junction of the Ukrainian and Romanian Carpathians.

The occurrence of very strong aftershocks with magnitude of more than 9 points are quite likely. In Ukraine can be tragic consequences. The intensity of aftershocks in the southwestern part of Odessa region (Reni, Izmail) to a possible 9 points, in Odessa and Nikolaev – 7-8 points, in Kirovohrad and Zaporizhzhya – 6 points, in the North of Ukraine – 5 points on the Richter scale. Given the soil characteristics of earthquake intensity can be even greater.

A strong earthquake in Odessa because of the activity in the Vrancea area occurred in 1701, 1802 and 1903. The city is in the 7-point zone. That’s a lot, but, in addition, the role played by soil characteristics, because of which power failure can increase. The strongest earthquake on the territory of Ukraine took place in Yalta on 11 – 12 September 1927. The strength of tremors in the epicenter (in the bottom of the sea) reached 9 points.

The people of Ukraine in the night of Saturday, could feel the earthquake, the center of which was located in a seismically active zone of Vrancea (Romania)

As reported by the US Geological survey (USGS), the quake was recorded at 23.11 UTC 7 kilometers West of the city Nereju. The focus lies at a depth of 88.3 km.

Clearly jolted residents of Moldova and the unrecognized Transnistria. How to write Moldovan media, the festival takes place in the night in Chisinau, were canceled, guests of weddings and cumatri went home.

Sunk tremors and to Belarus. For example, they felt in Belarus, about the same time, as in Kiev. No damage or casualties was not.

The Vrancea County near Severokuzbasskoe range is the most seismically active region of Romania. In 1977 there was an earthquake by force of 8 points in the epicenter and about 7.5 — in Bucharest, killing about 1.5 thousand people. The Director of the Romanian Institute of Earth Mircea Radulian says that earthquakes, such as the night, again in that region once every two to three years.