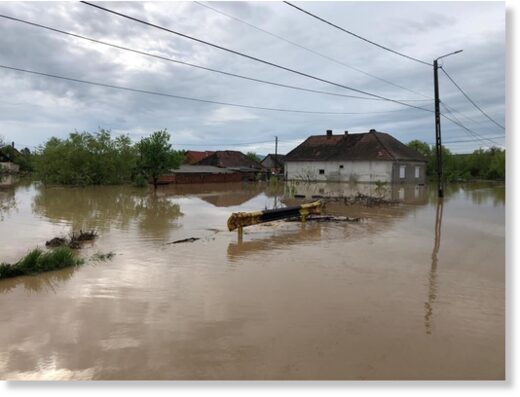 A short heavy rainfall on May 13, 2021 caused severe flooding in northern Romania.

Local authorities in Satu Mare County reported severe flooding in Ratesti and Supure. Authorities reported that tributaries of the Krasna River overflowed their banks after 70 mm of rain fell in 3 hours on May 13. The flooding was described as the worst in 20 years. Floodwaters were reported to have reached belt level.

As of May 13, about 150 people had evacuated flooded homes in Retesti and nearby Beltyug. The flooding in the Supur area affected 49 families, and 7 people were temporarily evacuated.

Tanchos Barna, minister of environment, water and forests, visited the affected areas. He said the amount of rainfall in such a short period was unprecedented for the region.

Hundreds of livestock have been killed and more than 1,000 affected households, some of them isolated. “It’s almost a miracle that we have no human casualties,” the minister added.