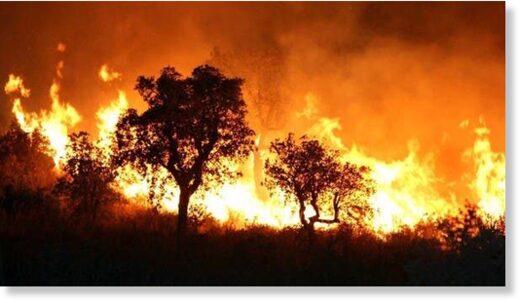 The Algerian President has ordered an “immediate” investigation into the wildfires that have devastated thousands of hectares across the country in recent days.

The purpose of the investigation is “to determine the causes of the fires that devastated vast forests.”

Local media reported that houses were destroyed in the fires, but a statement from President Abdelmajid Tebun’s office did not mention such incidents.

The country’s forestry agency said there were 1,216 fires between June 1 and August 1, which destroyed about 8,778 hectares.

On Thursday, Prime Minister Abdelaziz Jerad set up a monitoring group to track forest fires and efforts to prevent and combat them.

The fires peaked at the end of last month: on July 27, 66 fires were registered, and civil defense helicopters were called in to extinguish them, the forestry service said.

Algeria has faced bushfires on several occasions in recent years, but the results of a 2019 investigation to determine the cause have never been released.

A study by the geographic journal Mediterranee found that the lack of forests and gradual desertification made the fires particularly devastating.