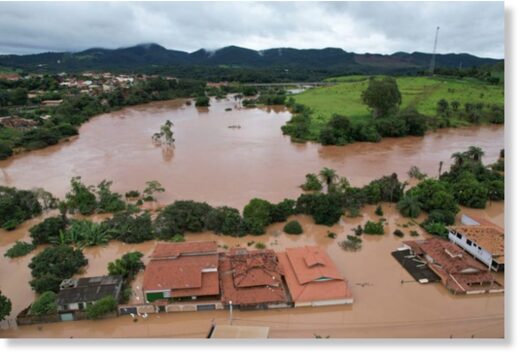 Heavy rainfall (more than 200 mm in 24 hours) in some areas caused new floods and landslides in the state of Minas Gerais, Brazil, where at least 15 people were killed in the past few days.

About 1,200 people were displaced from their homes after the Paraopeba River overflow flooded large areas of the municipality of Brumadinho on January 11. The Civil Defense also reported that 5 people died as a result of a landslide caused by heavy rain in that municipality. Brumadinho is the site of a tragedy with the collapse of a dam in January 2019, where 270 people died.

More than 10,000 people have been displaced by flooding caused by the Dose River spill in the municipality of Governor Valadares since about January 12, 2022. The Minas Gerais Civil Defense reported that about 55,000 people were affected by the flooding.

Flooding also damaged homes in the municipalities of João Pinheiro and Oliveira, where about 5,000 people were affected.

The Civil Defense reported that in the last few days 10 people were killed by floods and landslides in the municipalities of Belo Horizonte (1), Dores de Guanes (1), São Gonçalo do Rio Abaixo (1), Contagem (1), Hervalia (1), Caratinga (1), Santana do Riacho (1), Perdigao (2) and Uru Preto (1).

Since October 2021 and the beginning of the rainy season, the state of Minas Gerais has experienced periods of heavy rainfall. The situation worsened from about December 22, 2021, when 13 municipalities experienced severe flooding, mostly in the north. The neighboring state of Bahia was also severely affected during this period.

As of January 12, the Minas Gerais Civil Defense reported that more than 28,000 people had been displaced from their homes, and 341 municipalities had declared a state of emergency since October. Civil Defense reported that 24 people were killed in rain-related incidents, not counting those killed when part of a cliff collapsed in Furnas Lake, near Capitolio on January 08, 2022.

As of Jan. 09, at least 10 deaths were reported in the Lake Furnas disaster. Officials suggested that heavy rains contributed to the cliff collapse. The Brazilian Navy intends to investigate the cause of the disaster.