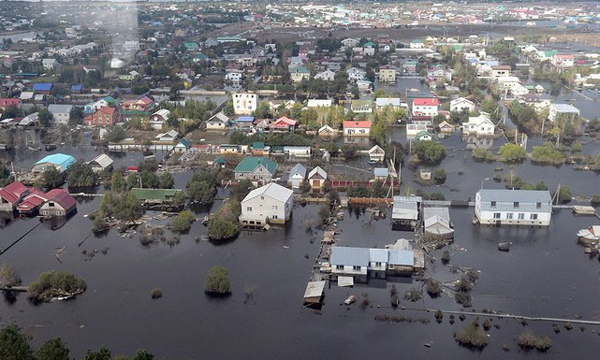 To Primorye came the new Typhoon — Namtheun. Declared a storm warning. Weather forecasters promise that within the next three days in the region will be heavy rains and predict a second wave of floods.

Earlier Primorye strongly affected by the previous Typhoon Lionrock and the preceding cyclone. Floods in Primorsky Krai flooded 3261 residential building on the territory of 14 municipalities. About it reports a press-service of the far Eastern regional emergency center (dvrts).

The result of the last heavy rains on the territory of Primorsky Krai as of 10:00 local time (03:00 GMT) photoplan 3261 house. Also on the 32 parts of the roads of Primorsky Krai observed modulations with a total length of 30.5 km from the flooded areas of the region evacuated 722 people, – stated in the message dvrts.

Rescue operations with the evacuation of people continues in the settlements of the Bright Terneisky district, Cleaning, Pavlovka, Antonivka, Noisy Chuguevsky district. These villages were completely submerged in the flood, and communication with them is carried out only with the help of helicopters and boats.

For liquidation of consequences of passage of a cyclone in the region deployed a grouping of forces and means in structure of almost 19 thousand people and 1186 pieces of equipment, including from EMERCOM of Russia – 5499 people and 431 units (138 boats). The aviation group is 25 aircraft and five unmanned aerial vehicles, including from EMERCOM of Russia, seven aircraft and four unmanned aerial vehicles.
Additional PVR

Additional temporary accommodation centers (TACs) are deploying in the Primorye territory in anticipation of the second wave of flooding, reported in a press-service dvrts.

To location prepared 23 PVR in Kavalerovskiy, red army, the Guerrilla, terneyskiy, Chuguevsky, Yakovlevsky areas, and also in Germany the city district and the city of Ussuriisk, – said the representative of the regional centre.

In the Ussuri urban district, in particular, a three TACs in case of aggravation of the flood situation. Points are deployed close to Ussuriysk, villages Korsakovka and Borisovka. Due to the fact that the weather forecast for September 4-6, adverse, Ussuriisk and in the villages organized the work on strengthening of hydraulic structures. Pumping water from pridomovyh channels is conducted round the clock, – said the head of the press service of the district administration Olga Teslenko.

In the Kirov region decided not only to deploy PVR, but also in advance to evacuate the inhabitants of villages, which, according to weather forecasts, will be in the area of the second wave of floods. According to the head of regional administration Arcady Kamenev, there are two such points, in the towns of Mountain springs and Kirovka, they are ready to receive people provided with water, food, medicines and basic necessities. However, the residents of the villages Podgornoe and Arkhanhelivka still refuse to leave their homes.

The most complex flood situation in Primorye, according to the MOE, is emerging today in the rivers of the East coast. In Olginsky, Lazovsky, Germany areas the rise in water level is 1.2 – 2.9 m On the rivers Avvakumovkoj, Margaritovka (Olginsky district), Black, Glazovka (Lazovsky district), Ore (Dal district) the water rose to the level of 1.2 – 2.9 m, flooded floodplains of 0.5-1.8 m in Terneisky district, blurred roads, disruption in communications with the villages, flooded farmland, villages.

In the upper reaches of the river Pavlovka (Chuguev district) level exceeded opasnuyu the mark on a 45 cm rise of water for the flood there is 2.2 m, with flooding of roads, farmland, villages Antonivka, Pavlivka, the rise of water on the floodplain is 1.7 m. In the Shkotovsky district on the river Shkotovka observed rise of water level due to discharges of water from the reservoir. On the artemovka river, water levels are in the category of adverse events, on the floodplain the water rose to 1.6 m, with flooding of farmland and low places in the village Shtykovo.

September 2 in the new region declared a storm warning. On the rivers of Primorye projected a new wave of flooding in the flooded zone will be the areas affected by previous rainfall, said korr. TASS press Secretary of the regional hydrometeorological centre Alexander Chulkov. It is expected that heavy rains in the region will go from 4 to 6 September.

According to him, the situation will be similar to the current a few days ago. Primorsky Krai will be the epicenter of a newly-formed Typhoon, but it will interact with what is already caused in the region a natural disaster. Rains again pass over the Sikhote-Alin, where originate most of the rivers of Primorye, so the water in them rises again.

The flood in Primorye

Lionrock Typhoon struck the Primorye territory after a powerful cyclone, which brought torrential rains from 29 to 31 August. The region had a three-month norm of precipitation. In the region because of the floods declared a state of emergency at the Federal level. The region was flooded over 3261 house thousand homes in 14 municipalities, 1086 local area.

In the area of flooding remain 14 municipalities. 32 sections of roads of the Primorsky territory, there are modulations with a total length of 30.5 km. For residents of the flooded houses deployed 16 temporary accommodation, where the food is organized, has the necessary Essentials. From the zone of flooding evacuated 722 people.