Today in California there were more than 20 earthquakes 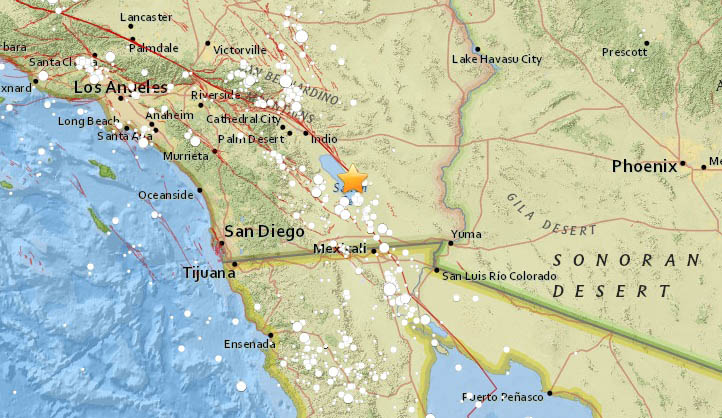 Today in California there were more than 20 earthquakes. The strongest had a magnitude of 4.5 points on the Richter scale. All the earthquake lies at a small depth from 1 to 4 km and located at salt lake, the Salton sea which is also close to many settlements.

The Salton sea is a salt lake in the area of internal drainage in southern California (USA).

It is approximately 970 km2, varies with precipitation. Is water abstraction for irrigation. Width 24 km, length 56 km, depth is 16 m, the volume of 9.25 km3. The largest lake in the state, the third largest salt lake in the U.S. and nineteenth in this parameter among all the lakes of the country. Flow into the new river, the whitewater, the Alamo. The basin is bounded by mountains, San Jacinto and Chocolate mountains.

Is a salt lake in California located 69 metres below sea level, and its ecosystem is as unique as the ecosystem of neighboring Death Valley.

On the South coast of the Salton sea is a volcanic complex Solton-Batts, which, according to the U.S. Geological survey, refers to volcanoes with high potential for eruption.

At the bottom of the Salton sea and surrounding pools are just three lines of faults – San Andreas, San Jacinto and Imperial. The epicenters of today’s events were in section Coachella, which refers to the fault of San Andreas.