Toxic red algae capture the seas on the oceans 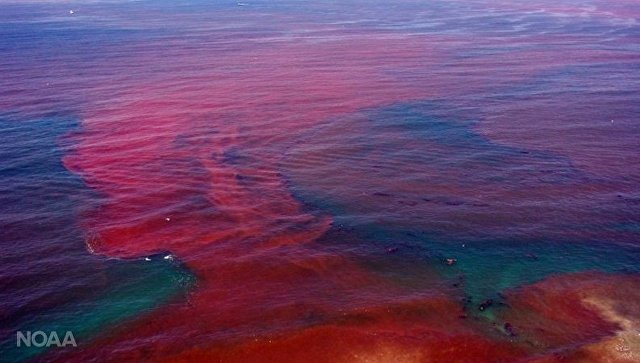 Toxic red algae, causing “bloody” rains and red tides, are sweeping across the seas and oceans due to their absolute omnivorousness, Russian scientists say.

“It was found that dinoflagellates Prorocentrum minimum can be fed as inorganic compounds – nitrogen, dissolved in water, -.. And organic substances, including urea, popular fertilizer If the water is not enough inorganic compounds, this species is switched to the urea therefore no such Conditions in which he would be uncomfortable, “- says Sergei Scarlato from the Institute of Cytology RAS in St. Petersburg.

In recent years, residents of Spain, the Caribbean and some other regions have encountered unusual phenomena – “blood rains” and red tides.

“Red tides” are extremely dangerous for other species of microbes, as well as fish and birds, as their constituent organisms emit brevetoxin (nerve poison) and other hazardous substances. As recently scientists have found, it occurs when plankton lacks certain trace elements – thus it produces a kind of “chemical weapons” to destroy competitors and mass murder of potential sources of necessary substances.

Scarlato and his colleagues revealed the secret of the “vital success” of such microorganisms, observing the growth of algae of the species Prorocentrum minimum, recently colonized the Baltic Sea and completely displaced those species of plankton that used to live in its waters. Large colonies of these microbes often form spots near the shores of Russia and the Baltic States, threatening the populations of fish and human health.

As it turned out, algae have a whole arsenal of tools and techniques that helps them survive even under the most unfavorable conditions. For example, at an abnormally low salinity of water, they dramatically increase the metabolic rate in order to compensate for the disruption in the work of DNA and proteins.

When scientists deprived Prorocentrum minimum of their main food – inorganic nitrogen compounds that enter the water of the seas along with mineral fertilizers – the algae did not die, but simply switched to urea and other organic sources of nitrogen that are traces of the livelihoods of animals or the products of the decomposition of their tissues and cells . Such substances, as biologists note, are usually toxic to plankton, but Prorocentrum minimum cells have learned to replace them with nitrates and other non-living sources of nitrogen.

The combination of these factors, according to Scarlato, explains why the epidemic of “blood tides” so quickly swept the Baltic. The ability to adapt to low or high salt concentrations in water and omnivorous helped Prorocentrum minimum colonize the relatively unstable coastal ecosystems of the Baltic Sea, where salinity and nutrient availability often change dramatically.

“By accumulating new data in the future, we want to create a model that can predict when and under what conditions these potentially toxic organisms will multiply especially intensively, then we can foresee this process and find a way to regulate it,” concludes Scarlato.