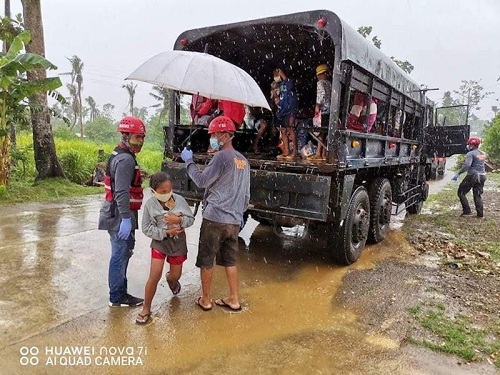 70,000 people or 18,467 families were evacuated before the onslaught of Typhoon Bising (Suriga) in the Bicol and Eastern Visayas regions, reported on Monday, April 19, 2021.

National Council for Disaster Risk Reduction and Management (NDRRMC). reported that 22 barangai in the Eastern Visayas were flooded and two sections of the road and a bridge became impassable.

Several sites have also been closed due to potential landslides. There were power outages in various areas of Cebu, Leyte, South Leyte and East Samar provinces.

A total of 2,213 passengers, 896 mobile cargo and 61 ships remained at different ports, and flights to and from Tacloban Airport were canceled.

The Department of Social Welfare and Development (DSWD) has allocated 1.597 billion pesos of funds and essential items to help the affected population.

On Monday at 10 am Bising was sighted 235 km northeast of Virac, Catanduanes. It weakened, the wind speed dropped to 195 kilometers per hour, and the wind speed – 240 km / h.

The Weather Bureau of the Philippine Atmospheric, Geophysical and Astronomical Services Administration (Pagasa) said it was moving slowly north-northwest.