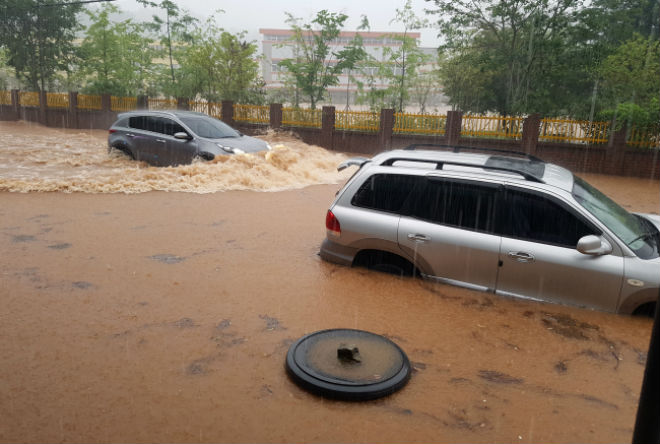 South Korea has suffered from strong rains caused by approaching the south-west coast of the country Typhoon “Prapirun”. As a result of difficult weather conditions, at least one person was missing.

Heavy rains caused floods in many areas. Due to bad weather traffic was disrupted, some domestic flights were canceled and a number of national parks were closed.

In Seoul, Gyeonggi Province and the western regions of Gangwon-do Province, about 300 mm of precipitation fell in places. As a result of the landslide, a 73-year-old woman was injured.

The Ministry of Internal Affairs and Security sent 36 government representatives to six cities and 11 provinces on Sunday as a preventive measure in connection with the possible descent of landslides. The government is also considering the possibility of creating a center of catastrophes.

In Pozong County, Cholla-Chamdo Province, cars were drowned in flood waters. From the floods, houses and paddy fields were seriously damaged, and the movement of trains was suspended.

According to the forecast of the Korean Meteorological Administration, typhoon “Papirun”, formed in the southeastern part of Okinawa (Japan), from Monday will bring down to 400 mm of precipitation on the island of Jeju and the province of Chollado.

It is expected that the rains will be poured all week. Local residents were urged to be cautious in connection with possible descent of landslides.