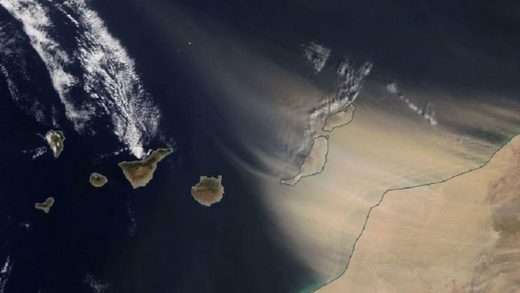 A powerful sandstorm that came from the Sahara desert disrupted air links to the Canary Islands from Saturday evening to Monday morning.

The storm affected even the islands of Lanzarote and Fuerteventura. Now look at the amazing satellite images collected in this video:

All 8 airports in the Canary Islands of Spain reopened on Monday, although service was reduced and difficult over the Spanish archipelago.

Travelers were advised to check flight status at their airline.

Air traffic was first interrupted on Saturday in Gran Canaria and Tenerife. On Sunday, AENA closed all 8 airports in the Canaries, and all flights were redirected to mainland Spain, Cape Verde, Morocco, Mauritania or Portugal.

Dust storms are dangerous for aircraft, as they reduce visibility. Moreover, a high concentration of sand and dust can damage engines.

Unprecedented for the Canary Islands

According to local authorities, the Canary Islands have never encountered such adverse weather conditions.

Officials even had to declare a state of high alert on Saturday and advise people to keep doors and windows closed and to avoid travel, as gusts of wind reached 120 kilometers per hour.

A strong wind also fired fires in the area of ​​the village of Tasarta in the southwest of Gran Canaria, forcing more than 500 people to evacuate. Another 1,000 people were evacuated to Tenerife after huge fires began in the north of the island.

The Canary Islands are currently experiencing a very unusual situation. According to officials, this is an unprecedented sandstorm, and this is the first time that so many fires broke out in many municipalities at the same time and in different places.