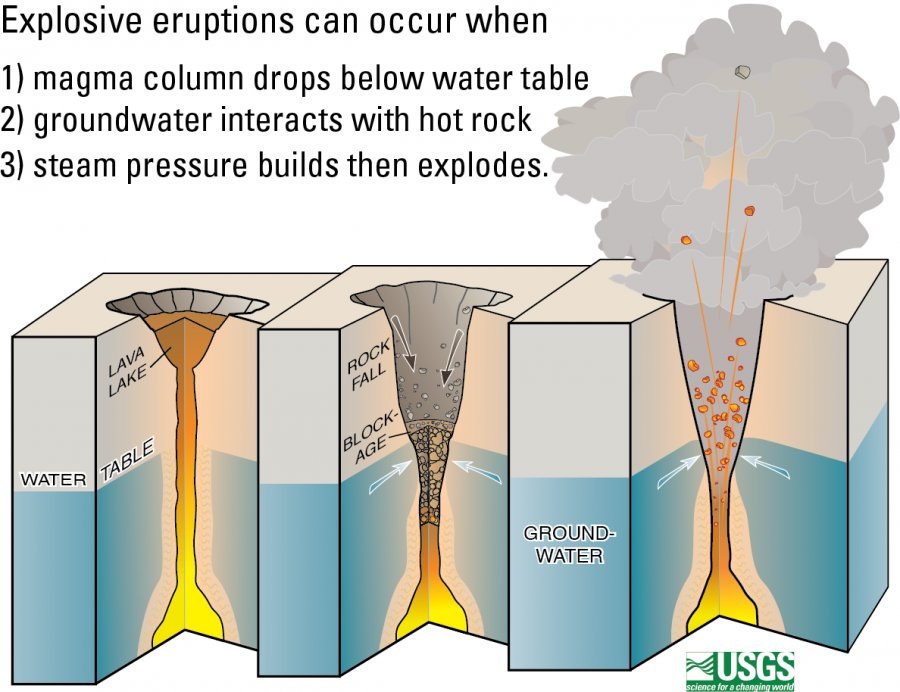 On the morning of May 9 at 08:29 local time, a rockfall in the crater of Halemaumau caused a short explosive ash eruption. After studying the ashes that were deposited near the crater, lava particles discarded from the lava lake found at a depth of more than 230 meters below the edge of the crater were found. A great concern among scientists is the lowering of the level of lava in the crater. If it falls below groundwater level, then there is a huge possibility that water will be able to seep into the lava lake and lead to phreatic explosions, which were observed in 1924.

* Phreatic explosion – coming into contact with magma with a lot of water or ice. Because of the instantaneous evaporation, a thermal explosion occurs, and with it, the release of huge stones, ash and lava bombs.

More than 50 explosions in 2 and a half weeks occurred in the crater of Haelemaumau (the largest crater of Kilauea volcano). The explosions remain the most powerful eruptions of Kilauea volcano since the beginning of the 19th century. Stones weighing up to 14 tons were ejected from the crater a distance of several km.
It all started with a swarm of earthquakes in the eastern rift zone, which is happening now. The level of lava began to fall, cracks formed, gas-vapor and lava eruptions were observed. After the extinction of seismic activity (which is observed these days), the level of magma in the lava lake began to fall (which is observed in recent days), and a few days later explosive eruptions began. The crater began to collapse. Ash clouds reached an altitude of 9 km above sea level.

The strongest explosion occurred on May 18, when one died after the debris hit. The explosive activity ended on May 27, starting May 9-10. Explosions were driven by steam due to groundwater contact with magma.