US military base in Greenland may cause an ecological disaster 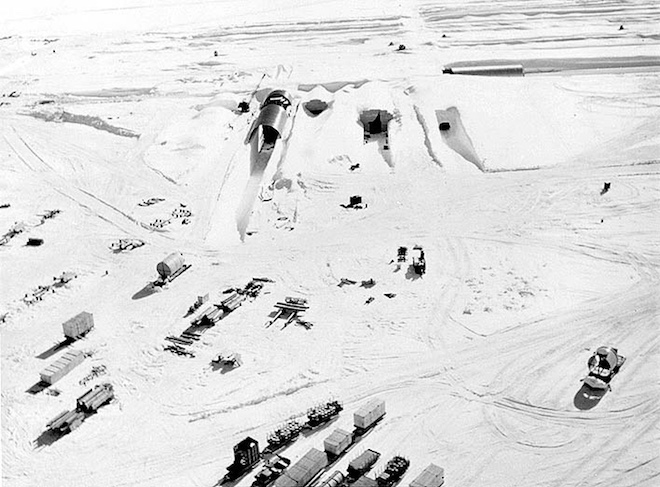 In the former US military base in Greenland, which is called the “city under the ice”, may leak contaminants into the environment as climate change. Hazardous wastes include printed circuit Board (PCB), storage tanks raw sewage and low radioactive coolant from a nuclear reactor once stood there.

In 1959 in the northwestern part of Greenland the U.S. army engineers began construction of a futuristic project, reminiscent of the scenery of spy movies during the cold war. In the network hidden under the ice shield of the tunnels was all from research institutions to the hospital, cinema and Church. The only source was a small portable nuclear reactor.

Officially object “camp century” (eng. Camp Century), can accommodate about 200 soldiers, was built as a laboratory for Arctic research projects, but actually was a secret base of the United States for storage and testing of nuclear missiles.

The whole project is under the code name “Ice worm” was never mentioned in the Treaty between the United States and Denmark. It included even the creation of railroads, but was never fully implemented. The base was abandoned in 1967. Three years later, scientists found that the glacier moves much faster than previously thought, threatening to crush the tunnels.

Believing that the land will be forever frozen, the U.S. army has removed a nuclear reactor, but the waste, the weight of which is equivalent to 30 Airbus A320, left under the ice. Now, half a century later, the correctness of this decision was questionable, as the temperature in the Arctic is growing more rapidly than the rest of the world.

The study, led by William Colgan from York University in Canada, published in August in the journal Geophysical Research Letters, showed that a further increase in temperature could eventually lead to the release of toxic waste from the database to the environment.

“When waste was canned, no one imagined that they could be put back on the surface. Neither the United States nor Denmark is in fact innocent, but the world has changed,” says Colgan.

According to the forecasts, by 2090 the melting of the ice can no longer be compensated by the snowfall, which means that toxic chemicals can start to get into the environment. Even before the cracks in the snow can lead to the percolation of melt water from the destroyed tunnels, located about 35 metres below the surface. According to Kalhana, with the scavenging operation will have to wait until the ice over the camp won’t melt due to the high cost of excavation.

The Minister of foreign Affairs of Greenland called the results of the study alarming and said that work is already underway on the establishment responsible for cleaning up the place. In 2014, the government requested a report from Copenhagen on the subject of possible contamination of camp century” but did not receive any assessment of the threat of pollution and the nature of the waste.
After the report Colgan the Ministry of defense stated that it acknowledges the reality of climate change and the risks it presents. America will continue to work with the authorities of Denmark and Greenland on issues of mutual security.

Colgan noted that earlier, the US and Denmark have cleared the area 240 kilometers from camp century, where in 1968, a crashed B-52 bomber with four hydrogen bombs on Board, so the disinfection space should not be too difficult.

“The environmental hazard is relatively small. The area is quite removed, only a few cities located in the surrounding area. To establish which country is responsible for it, is not so simple, but it will help to set a precedent for other conflicts arising from climate change, ” he said.
According to Christian Nelson from Aarhus University Denmark, in the end, probably both countries will take joint and several responsibility for clean-up base in Greenland, as the Americans built it there, and the Danes allowed them to do it.