USA: Mysterious black substance on Wells Beach, Maine, turns out to be millions of dead bugs 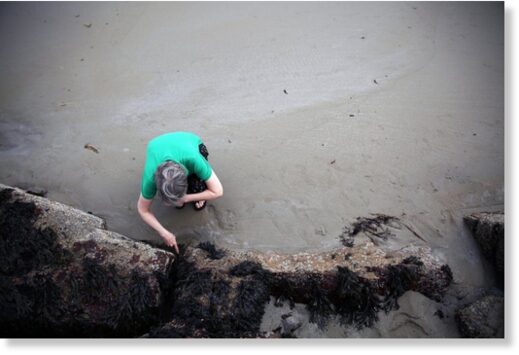 Ed Smith has been walking on Wells Beach for years, but has never seen anything like this: A mysterious black substance that settles on the sand near the shoreline and stains the feet of anyone who ventures too close.

He first noticed it on Sunday night. When he returned Monday, it was there again. He talked to about a dozen beachgoers, and they all said they noticed it, too.

“I sat on the edge of my bathtub with a blue Dawn (dishwashing soap) and a scrubber, but I still couldn’t get the stain off my feet,” Smith said.

It took several appeals to local and state officials and the help of a retired scientist who lives nearby, but Smith got a response Tuesday. That has only raised more questions.

According to Steve Dixon, a marine geologist with the Maine Geological Survey, the black substance was dead insect carcasses. Millions of dead insects. The bugs float in the ocean, but when the waves come ashore, they settle on the beach and stay there when the tide comes in again.

“This is the first time I’ve seen or heard of this in my 35 years,” Dixon said. “Usually at this time of year we get calls about too much algae on the beach and flies swarming around the decomposing algae. That hasn’t happened yet.”

Dixon said he’s still working with entomologists to figure out what these bugs are, where they came from and why.

When he realized the photos depicted Wells Beach, he contacted Linda Statoplos and John Lillibridge, a married couple who live nearby and are both retired oceanographers. They also participate in a state beach monitoring program.

The couple offered to go down to the beach and take samples. Statoplos said they had never seen anything like it either.

“I collected a few, brought them back and put them under the microscope,” she said. Retired scientists still keep their tools handy. “They were clearly small bugs.”

When asked why bugs might stain people’s feet, Dixon said the bugs often feed on plants that contain pigments. Moreover, in some countries beetles are still used to dye clothing.

It remained unclear what kind of beetles they were and what species they belonged to, as well as how they ended up in the water and then dead on the beach.