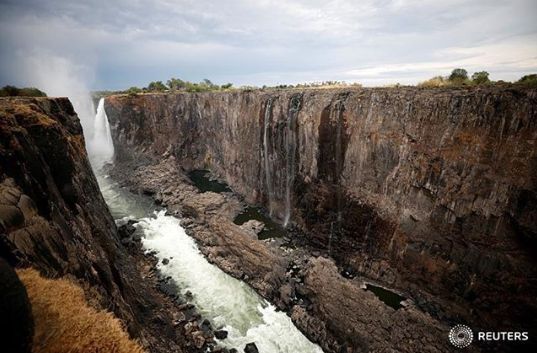 The world famous Victoria Falls, located on the Zambezi River in South Africa, has turned into a stream due to drought in some areas. And there are fears that one day it may completely dry out if urgent measures are not taken.

Water levels at waterfalls that border Zambia and Zimbabwe have now fallen to their lowest level in 25 years. The flow of Victoria Falls has fallen by an average of 50%, which affects local farms and the number of tourists.

Before and after pictures of Victoria Falls. Yes, this is during its dry season, but the levels have never been this low. There is a drought in the region affecting wildlife, agriculture and power. Climate change is real, and anyone who says it’s not (Mr. Trump) is deluded. #climatecrisis #victoriafalls #skynews #sydneymorningherald #bbc #drought #extremeweatherevents #nationalparks #wondersoftheworld

“These photos are a vivid reminder of the impact of climate change on our environment and livelihoods. There is no doubt that developing countries such as Zambia are most affected by climate change and its effects, ”said Zambian President Edgar Chagwa Lungu.

Typically, the water level in the waterfalls decreases during the dry season from May to November. However, according to officials, this year there was an unprecedented decline in water levels, and the rains had not yet arrived.

It is estimated that two million people in Zambia are starving and in need of food assistance, as drought has hit agriculture. A landlocked country is highly dependent on hydropower and has drastically reduced the amount of electricity it produces. Power outages occur in Zambia and Zimbabwe on a daily basis, and the Kariba reservoir resulting from the construction of a dam for a hydroelectric power station has decreased by a quarter. “We are close to the point when it is necessary to stop the production of electricity,” said Minister of Finance Mtuli Nkube.

The mining industry suffered from a decline in electric capacity, and the leader of Zambia has revised its country’s GDP growth from 4% to 2%. According to Mr. Lungu, the economy of Zambia should grow by 7% in order to have any significant impact on poverty. In an interview with Sky News, the head of state mentioned US President Donald Trump’s policy on climate change: “We don’t have time for games. This is a serious problem, and we are surprised when people trivialize it and say that it is not real. They live in a different world, but we live in Zambia and fully experience the impact of climate change on our lives. ”

Victoria Falls is the largest in the world, with a total width of 1708 meters and a height of 108 meters. It was named after the British Queen Victoria by Scottish explorer David Livingston, who is believed to be the first European to see him in 1855. In the local language, the waterfall is known as Mosi-oa-Tunya (“smoke that rattles”). Both names are officially recognized on the World Heritage List.