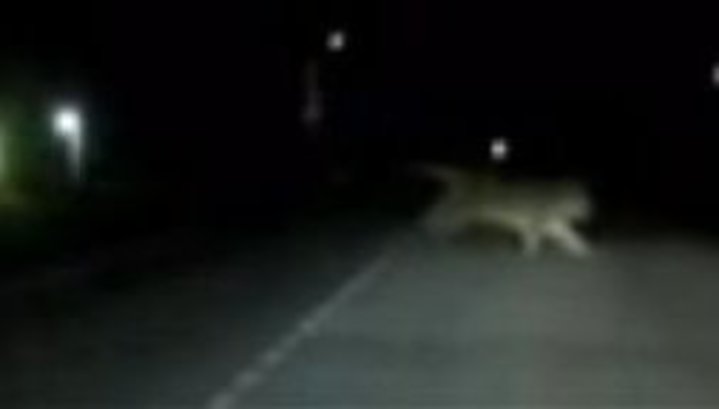 Environmentalists have confirmed that near Vladivostok appeared Amur tiger. There is even evidence that he went into residential areas. People living in the suburbs, warned that caution, and if you notice the animal, it is better to report to the Department of hunting management Department or Ministry.

The movement of the Amur tiger spotted a surveillance camera. He walked straight along the road. Within a hundred yards of another road, which is very densely populated residential area. It is a suburb of the city of Artem, village Corner.

It all started with a video, made a lot of noise in social networks. It shows a large predator quickly crosses the street. And then there’s another one: animal, size and habits resembles the Amur tiger, like the rules of the road calmly and confidently goes on the left edge of the dirt road.

Employees of the company, whose cameras have captured the moment, still under impression.

Though the video quality leaves much to be desired, scientists have been able to recognize four-legged alien with a young Amur tiger. Filming date is also confirmed.

Now in the area where the accident happened — a task force of regional Department of hunting management Department. They interviewed local residents, visiting the area and set camera traps. Now you need to understand whether it is a one-time event or an emerging trend.

In the history of Primorye tigers yield to the people were recorded more than once. But this applies mainly to starvation in the forest in early spring and in remote taiga settlements. However, in 1986, the tiger came to the people in the suburbs of Vladivostok, just 15 kilometers from the city. I was looking for a predator now, this can yet only guess. Especially as long as there is no witness, and the animal itself, as if vanished into thin air.

The locals mostly discuss the incident calmly. And build their own versions.

Local hunter believes that the movement of predators is a normal phenomenon. Tigers may be linked to herds of wild ungulates that migrate. For example, for goats. They migrate for goats, not bothering with the people.

The specialists are sure that a predator, most likely, already left the city limits. However, residents recommend with caution to come out in the dark on the street, and drivers are advised to observe speed limits on the roads.

Experts say that the output of the Amur tiger in the area is atypical. While there is a collection of information to local residents, in case of meeting with the animal, it is recommended not to take any action, immediately contact the emergency services. No further evidence that the predator came again in a residential district has not been received.