Volcanic activity is on the record 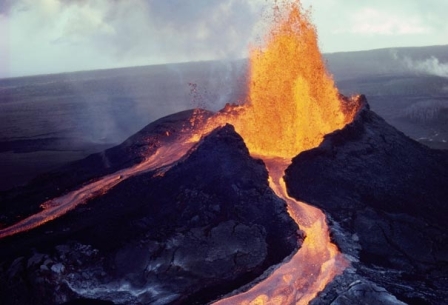 Over the past 10 days about 40 volcanoes in the world showed increased activity. 34 of them are located along the Pacific volcanic ring of fire — area around the perimeter of the Pacific ocean, where most active volcanoes and many earthquakes.

Given that in the twentieth century the average number of volcanic eruptions was 35 per year in one only the past week the number of active volcanoes exceeded this figure. In addition, experts recorded increased seismic activity.
The most devastating was the volcanic eruption of mount Sinabung in Indonesia occurred on may 21-22. Seven villagers were killed, Gambar as a result of poisoning by the products of volcano emissions. In addition, increased volcanic activity was registered in Costa Rica, Mexico and Italy.

Note also that last Tuesday, two new lava flow erupted from Kilauea volcano in Hawaii. Human settlements none of the streams of molten rocks, fortunately, not in danger.