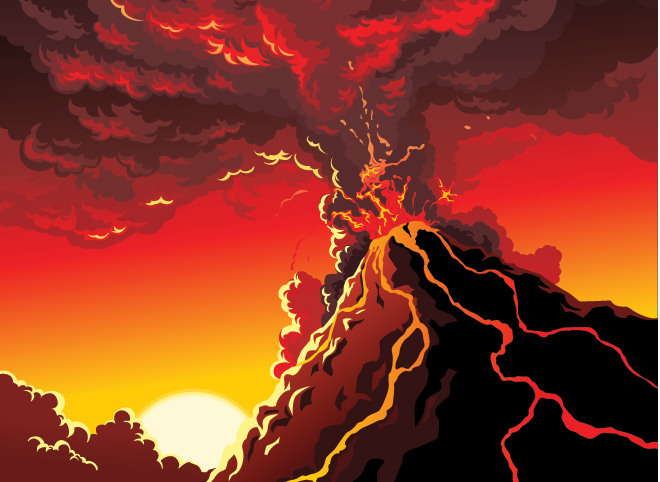 What would happen if the Earth at the same time begin to erupt from all active volcanoes? Nothing good. What happens to look a lot like the Apocalypse.

Our planet’s 1,500 active volcanoes, each of which has erupted at least once in the last 10 thousand years. In addition, 500 volcanoes on the ocean floor explode in the known history of the planet.

Not all eruptions are the same. You can split the explosions of volcanoes two types. First, effusive volcanoes throw out lava flows and a lot of gas. Second, explosive, ash and gas. The difference in activity depends on the viscosity of the magma. The higher the viscosity of the magma, the more difficult it gas to get out, and the more likely explosive nature of the eruption.
So, what happens when all 1500 volcanoes to erupt together? The first affected people living near volcanoes.

Danger will represent magma flows Pyroclastic flows — fast flowing rivers of rock, ash and gas, are very hot, their temperature rises to 1000 degrees Celsius. From such streams will not escape, not even leave,their speed is 724 km/h.

Volcanoes also emit air jets of ash that spread thousands of kilometers. Volcanic ash is dangerous for all kinds of engines and buildings that can collapse under its weight. Inhalation of fly ash could cause lung problems, including silicosis. There may come an overload of the immune system, causing a number of secondary diseases. Communications will not work — the ashes will bring down the satellite dish and will block radio waves.

The ugly — long-term changes in the Earth’s climate. Volcanoes are usually associated with heat. However, a huge amount of gas and ash ejected into the atmosphere, will lower the temperature on the planet. Sulfur dioxide, combined with water, will turn into aerosol particles, which reflect sunlight back into space. In result the planet cools, there may come a glacial period.

In the long run we will see the opposite effect — the Earth’s temperature will rise. For hundreds of years the carbon dioxide emitted by volcanoes would warm the planet. At the moment the mankind produces 50-100 times more CO2 than volcanoes.