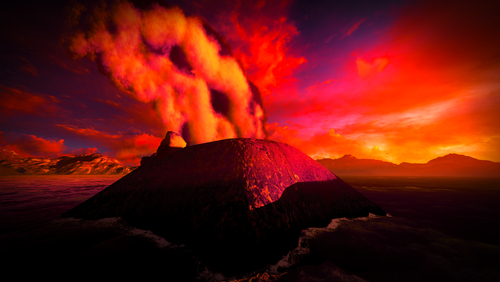 Researchers from the United States have established that our planet is becoming increasingly vulnerable to large volcanic eruptions. Global warming increases the difference in the temperatures of different layers of the ocean, and it can no longer function effectively as a “heat storage”. A corresponding article is published in Nature Communications.

The authors of the new work carried out modeling of the eruption of the Indonesian Tambor volcano (1815) in the conditions of 2085. Such eruptions occur about once every 270 years, which determined the choice of 2085 for the date of the next event. It turned out that because of warming the upper layers of the ocean in our time have become so warmer than the lower ones that the previous mechanisms of braking of the volcanic winter no longer work.

In 1815, Tambora threw a huge amount of sulfur into the stratosphere, which formed there sulphurous aerosols. They increased the amount of sunlight reflected by the Earth into space, significantly cooling the planet. This caused a “year without summer” – heavy snowfalls were going on in New York and Canada even in the month of June.

However, in the XIX century, the ocean partially compensated for the planet’s cooling caused by the volcano. When the upper layers of sea water cooled, they fell down, and from there rose less cold water masses. In the 21st century, as the simulation showed, it does not work out that way. The upper layers in the seas are so warm that they will be much longer cooled until they have to sink down. Therefore, the eruption of the Tambora class will drop the average annual temperature on the planet by 1.1 degrees Celsius.

At first glance this does not seem like a big problem. Warmer sea water will not allow temperatures to drop below the normal for the 20th century. But in fact, and this will be felt extremely painfully in 2085: because of global warming, everyone has long been unaccustomed to the harsh winters. In addition, the volcanic winter from the new large eruption is stronger than in 1815, will reduce the volatility of water from the sea surface. This will lead to drought at once in many regions of the world, because rains form precisely from the water evaporating from the seas. Such a drought will significantly reduce the yields across the planet and lead to hunger.