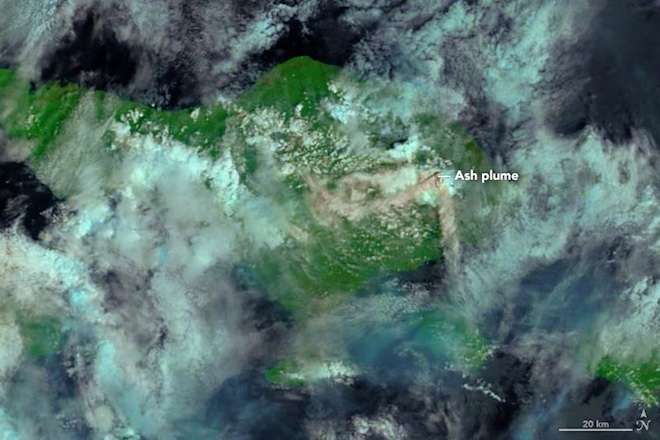 Volcano Agung continued to erupt, throwing a volcanic stream of gas and ash over the Indonesian island of Bali. Ashes are seen among the noonday clouds in this false color image, which was removed on November 29, 2017 by the MODIS spectroradiometer on Terra satellite. The image uses a combination of short-wave infrared light and natural colors, which made the differences between ash, clouds and forest more apparent.

The jet rises from two holes in the crater of the volcano. It can vary both the level of sulfur oxide, and the volume of steam and ash. A white stream indicates a large proportion of the vapor, a dark stream indicates a predominance of ash.

Volcanic steam, lava and ash usually exert local and regional influence, while gas emissions can sometimes have global consequences. “The current Agung eruption is still not energetic enough to affect the global temperature, as the Pinatubo volcano did during its eruption in 1991,” says David Considine from NASA’s Earth Sciences Department. – In order for the temperature to change, the Agung’s eruption should have thrown out a significant amount of sulphate aerosols into the lower stratosphere, which in the tropics is above 16 km. The height of the current eruption is about 9.6 km. This is well below the level that is necessary for the eruption to have a tangible global impact on the surface temperature. “