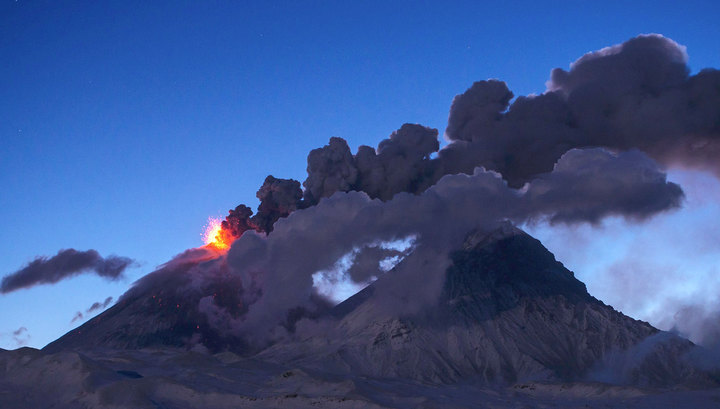 On the morning of August 11, 2017, according to the satellite data of the Kamchatka Volcanic Eruption Response Team (KVERT), Klyuchevsky volcano recorded an ash release at a height of up to 6500 meters. The height of the volcano itself is 4750 meters.

Taking into account the direction of the wind, the ash plume spread 20 kilometers in a northeasterly direction from the volcano towards the Gulf of Ozerny. There are no settlements on the way of spreading the plume.

According to the conducted information interaction with the operational duty of uniform duty-dispatching services, dispatchers of fire-fighting units, ash deposition in the settlements of the Kamchatka Territory has not been recorded. International routes of aircraft traffic in the area of ​​Klyuchevskaya volcano do not pass.

The volcano is assigned an “orange” aviation hazard code.

– when breathing in the ash and getting it into the lungs, allergic reactions are possible, therefore, when ash falls, it is necessary to close doors and windows, to try not to go out without the need;

– If the ashes penetrate the dwelling, family members should wear respirators or cotton dressings impregnated with soda solution;

– Cover the computer, stereo system and other equipment with a plastic film or a dense cloth and do not use during the fall;

– if you worked during the asphalt on the street, do not bring clothes into the house;

– after ash falls, wear a respirator and glasses before cleaning the house of ash; Clean the roof, gutters and other places of the house where ash could accumulate; To update the stock of the necessary, which should be in your case in the event of a fall.

Rescuers also recommend that residents and guests of the region who plan trips to the volcano area should observe their own safety measures: in the immediate vicinity of the volcano, the maximum permissible concentration of gas can be observed when steam-gas emissions are exceeded. When approaching the volcano there is a chance to get into the ashfall, which can lead to allergic reactions, the ingress of ash into the mechanisms of cars and their failure.

If the situation is a threat to your life or the lives of others, you need to call a single rescue phone number: from fixed-line phones – “01”, from mobile phones – “101”. By phone “101” you can call from all mobile operators, the call is free anywhere in the Kamchatka Territory.