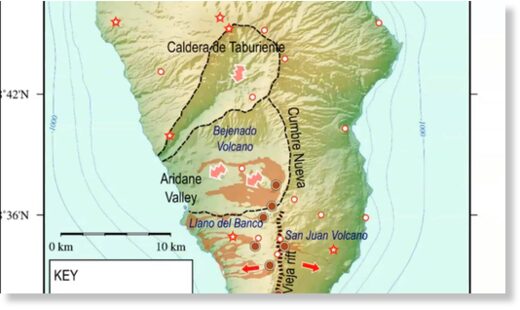 A strong swarm of earthquakes began yesterday under La Cumbre Vieja volcano in the southern part of the island. More than 350 tremors have been recorded so far, including 14 earthquakes above magnitude 3.0 and 226 earthquakes between 2.0 and 2.9.

The strongest was a magnitude 3.4 event at 00:46 a.m. local time, which was felt by nearby residents.

Most of the earthquakes occurred at a shallow depth of about 8-12 km, suggesting that new magma is now seeping into the reservoir beneath the volcano.

Whether this could lead to new volcanic activity is impossible to say at this stage, as there are no other signs of significant volcanic disturbances yet.

Similar swarms of earthquakes have occurred in the past, most recently in late December last year; however, the earthquakes were deeper then (at a depth of about 30 km), which may indicate that magma has risen higher in the volcano’s underground vaults.

La Cumbre Vieja volcano last erupted in 1971 and is considered one of the most active volcanoes in the Canary Islands. The situation clearly deserves close monitoring.