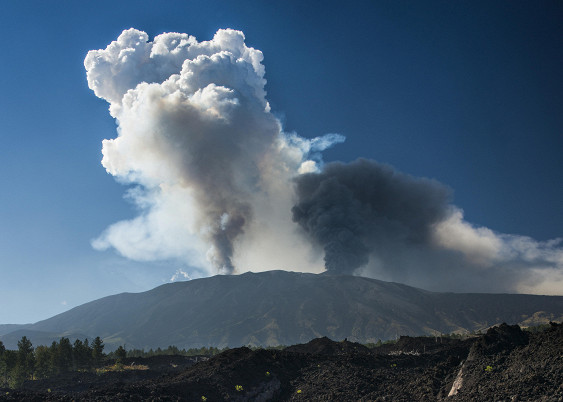 Volcanoes in the Phlegrean fields in the vicinity of Naples can erupt in the near future, as evidenced by the accumulation of tectonic stress and deformation of rocks in the mouth of the former super volcano, according to an article published in the journal Nature Communications.

“Following the formation of cracks and rock shifts in the Phlegrean fields, we believe that now this volcano has reached a critical phase, and further increase in activity will make the eruption probability big enough.” It is extremely important for the local authorities to be ready for such a course of events, “said Christopher Christopher Kilburn of the University College of London (UK).

During the existence of human civilization, seven large eruptions occurred, one of which, the explosion of Mount Tambor in 1815, destroyed 71,000 people and led to a marked cooling of the climate and a series of crop failures and famine in a number of countries around the world.

Another major eruption, records of which were the first in the history of mankind, occurred in 1538 in the vicinity of Naples, in the so-called Phlegrean fields. These fields represent the mouth of a large super volcano, the eruptions of which in the past were not inferior in Tambora’s power and could serve, as geologists now believe, the reason for the extinction of Neanderthals in Europe about 50,000 years ago.

Kilburn and his colleagues have been monitoring the state of the Phlegrean fields for several years, whose activity has increased significantly recently. As last year’s measurements showed, the height of some regions of the volcano grows at a rate of about 3 centimeters per month, which indicates the formation of an magmatic chamber under the Phlegrean fields. In December 2016, the Italian authorities seriously thought about the evacuation of nearby settlements because of the excessive activity of the volcano.

British and Italian geologists say that such concerns were justified by calculating the rate of magma accumulation in the depths of the Phlegrean fields in the last half century and discovering where the source of seismic shocks and deformations is located.

As scientists explain, many geological and tectonic processes can be imagined as a basin with an incoming and outgoing pipe. In the role of the first are all sources of seismic stress, including lava flows rising from the depths of the Earth, and the second – weak tremors, mini-eruptions and other ways to “safely” get rid of this energy. If the voltage is not released quickly enough, it gradually accumulates, which in the future can lead to a powerful eruption or an earthquake.

In the area of ​​Naples, as measured by Kilburn and his colleagues, this tension has been accumulating since the beginning of the 1950s, and by today, Phlegrean fields have accumulated enough magma to create a powerful eruption if it breaks out.

In the last few months, according to geologists, the lava rose to a mark of 3 kilometers from the surface of the Earth. How quickly she will overcome this distance and then, whether she will stop her movement this time, scientists do not yet know, but the probability of eruption today is the highest for the last several hundred years. For this reason, geologists advise the authorities of Naples to “be ready” for more Serious consequences than a series of powerful tremors, usually accompanying the growth of the Phlegrean fields in the past.